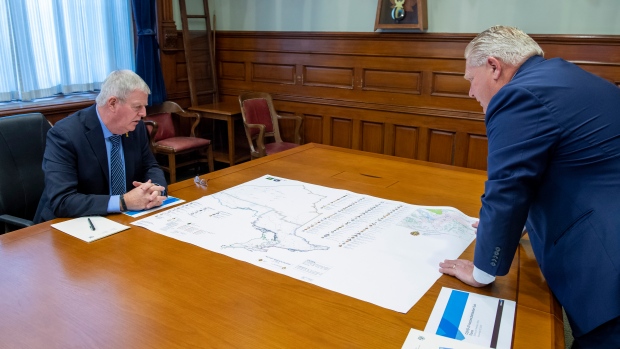 Ontario Premier Doug Ford and former head of the Canadian Armed Forces Gen. Rick Hillier look over a map in the PremerÕs office at the Ontario Legislature in Toronto on Friday November 27, 2020. Hillier is to lead a new task force that will oversee the rollout of the COVID-19 vaccine in the province. THE CANADIAN PRESS/Frank Gunn

The Ford government is set to unveil its COVID-19 vaccination task force on Friday as several vaccines are pending approval from Health Canada.

During his daily press briefing on Thursday, Premier Doug Ford said that members of the task force along with their plan to distribute the vaccine will be revealed tomorrow.

“This task force, our experts, will take a hard, close look at our extensive planning. It will stress test to make sure beyond a shadow of a doubt that Ontario will be ready,” Ford said.

Hillier served as Chief of the Defence Staff of the Canadian Armed Forces between 2005 and 2008.

Ford has said that “we need the discipline that only a general can bring to this task” when explaining why Hillier was named for the job.

“Minister of health, Solicitor Jones, and their teams have been working on this for months. When I first met Gen. Hillier he had an opportunity to sit down with those teams and he was amazed by how much work they’ve been doing,” Ford said on Thursday.

“There’s also a bioethicist who’s joining the group who’s going to help to make decisions about who is going to receive the vaccination after we get through dealing with people in long-term care homes and our frontline healthcare staff.”

The task force is responsible for overseeing the distribution of the vaccines once they are approved by Health Canada.

“They’ll be making recommendations to us as a government about who they think should be next in line [to receive the vaccine] because this is a program that’s going to take a number of months to fully unroll,”Elliott said.

Alberta announced its COVID-19 vaccination task force on Wednesday and when Ford was asked if there is a delay in unveiling Ontario’s plan he said “absolutely not.”

Elliott added that the government is finalizing details before publicly announcing the task force.

“We're just dotting the I’s and crossing the T’s on some of the documentation for them but that will be ready by tomorrow because I know that people in Ontario want to know who’s going to be on this task force and what their goal will be,” Elliott said.

As for when Ontario can expect shipments of the vaccine, Ford said the government is waiting to hear from Ottawa on an exact date and the amount of doses the province will receive.