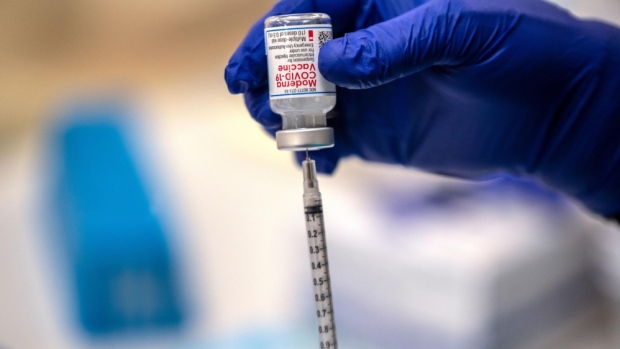 OTTAWA - Intergovernmental Affairs Minister Dominic LeBlanc is sounding a note of hope that Canadians who mixed and matched COVID-19 vaccines will not have a problem crossing borders in the months ahead.

While Canadian health authorities say recipients of a Moderna dose should not hesitate to have Pfizer-BioNTech as their second jab - or vice versa - the U.S. Food and Drug Administration has so far been reluctant to sanction the practice, saying it should only be done in “exceptional situations.”

The differing views raise questions about how easily Canadians who mixed and matched will be able to cross into the United States once it opens its land borders to its northern neighbour.

Meanwhile many European countries do not recognize the Oxford-AstraZeneca vaccine made at the Serum Institute of India, known by the brand name Covishield, meaning Canadians who received it could find themselves barred from entry.

LeBlanc said data sharing and conversations between health bodies across the globe “will, we believe, over time lead to an evolution and an adjustment” of the more conservative approach of some countries' regulatory authorities.

“We don't expect this to be a static circumstance. And I think over the next number of weeks and months there may be revisions provided by health authorities around the world with respect to these vaccine regimes,” he said at a virtual news conference Tuesday alongside Canada's deputy chief public health officer.

Dr. Howard Njoo highlighted studies on mix-and-max inoculation that point to its effectiveness, saying that falling case counts and death tolls in Canada reinforce the finding.

“That's adding to the body of science,” he said. “The proof's in the pudding.

“Hopefully we can get to a place where we do make it easier for citizens of individual countries to be able to travel to other countries with a more common approach.”

As of Aug. 9, fully vaccinated U.S. citizens and permanent residents will be allowed to enter Canada without quarantining so long as they provide proof of vaccination and the results of a negative COVID-19 test no more than three days old, prior to departure.

The same rules will be extended to fully vaccinated travellers from around the world as of Sept. 7.

Officials in Canada and a range of other countries - Germany, France, Italy, Spain and Sweden among them - have authorized people to follow one dose of AstraZeneca with a different vaccine.

Prime Minister Justin Trudeau received a shot of AstraZeneca, which has been potentially linked to a rare blood clotting disorder, in April and a Moderna dose earlier this month, a sequence not approved by U.S. regulators.

Canada's National Advisory Committee on Immunization changed its guidelines last month to allow Moderna or Pfizer to follow an initial dose of AstraZeneca.

Potential barriers to travellers go beyond border restrictions. Several cruise lines are refusing passengers who mixed and matched to any degree, including Norwegian Cruise Line.

Princess Cruise Lines, Holland America Line and Carnival Cruise Line say customers injected with a vector vaccine such as AstraZeneca followed by an mRNA vaccine such as Pfizer or Moderna are not considered fully vaccinated. However, a combination of Pfizer and Moderna will open the gangway to guests.

On Tuesday, LeBlanc defended the government's recent decision to scrap the arrival test for fully vaccinated travellers - except for random screenings - while maintaining the pre-departure test.

Health Canada's expert panel on testing and screening had recommended turfing the pre-departure test and keeping the arrival test to better insulate Canadians from coronavirus variants.

“The importance of having an arrival test, whether it's a random arrival test for those who are fully vaccinated or an obligatory test for those that aren't, is one of the essential elements in tracking data on whether vaccinated people can in fact carry the virus or â€¦ with respect to potential variants of concern,” LeBlanc said.

Njoo added that a pre-departure test can weed out most doubly vaccinated virus carriers. Meanwhile arrival tests have yielded positive test results in percentages that “are fractions below one per cent for both the air and land travellers,” rendering them virtually unnecessary for the fully inoculated, he said.

Total active COVID-19 cases have fallen below 4,700 for the first time since late August 2020, Njoo said, with about 400 new cases reported daily.

There are 87 per cent fewer people in hospital each day than at the peak of the third wave in April, while an average of nine deaths are reported daily, he said.

“This is great news because the more people who get vaccinated, the stronger our vaccination firewall will be,” Njoo said.

This report by The Canadian Press was first published July 20, 2021.