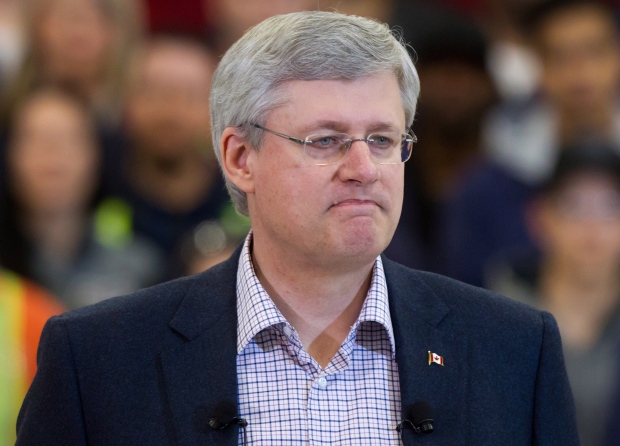 Prime Minister Stephen Harper pauses while speaking about the terrorist attack by masked gunmen in Paris, during an announcement at the British Columbia Institute of Technology Annacis Island Campus in Delta, B.C., on Thursday, Jan. 8, 2015. (The Canadian Press/Darryl Dyck)

OTTAWA -- Canada is at war with the Islamic State and will do what is necessary to eliminate the threat it poses, Prime Minister Stephen Harper said Thursday.

His comments came as the military revealed that CF-18s have carried out another seven attacks in Iraq over the last couple of weeks.

A decision to extend the air mission, which is due to end in April, has not been made, but prime minister said when the time comes one of the criteria will be "the kind of risk it poses to our country."

And Harper said the risk is significant.

"This is a movement that has declared war on Canada specifically and has shown it has the ability to develop the capacity to execute attacks on this soil," he said at an event in Delta, B.C.

His use of the word "war" is important because it carries specific, legal connotations and the government generally avoided using it during the long campaign against the Taliban in Afghanistan. The word does not appear in the parliamentary motion which authorized the mission in Iraq.

Underscoring that the campaign against extremists in Iraq is a war sets up and reinforces Canada's responsibilities under international law, particularly when it comes to the treatment of any prisoners and in the protection of civilians.

The U.S. announced this week that it is reviewing data surrounding two coalition bombing missions -- one in Iraq, the other in Syria -- looking into concerns that civilians may have been killed.

The U.S. Central Command, which oversees coalition operations, says it is investigating those strikes and examining the results of three other missions to see if reviews are warranted.

Since Canada joined the bombing campaign in late October, Canadian military officials have said they are confident no civilians have been hurt by CF-18 missions.

"That I am aware of, we have not had any reporting of any civilian casualties associated with any of our strikes," he said.

Washington took a similar line until just recently when it acknowledged it is looking into claims that innocents were caught in 18 separate strikes aimed at Islamic State militants. Most of the accusations relate to missions in Syria.

A U.S. military official, in a statement released earlier this week, said the cases under active investigation were flagged by the military's own review of the damage and not by complaints.

Canadian fighters, as of Wednesday, had flown over 200 sorties in support of the air campaign to dislodge the Islamic State in Iraq and the Levant from territory it seized last summer.

Some of the more recent strikes -- including missions on Dec. 19, 20 and Jan. 1 -- were in support of Kurdish peshmerga forces. They recently broke the roughly four-month siege of Mount Sinjar, where more than 10,000 Yazidis fled in August to escape massacres. It was their plight that prompted the U.S. to organize the air campaign.

A defence expert in Washington says limiting civilian casualties is important, but the U.S. should not let the fear of it paralyze the air campaign. The coalition has a responsibility to uphold the laws of war, but it is facing an enemy that deliberately uses civilians as shields and will exploit western integrity to its advantage.

"Human rights and the laws of war become political and military weapons in the hands of terrorists and extremists that have no practical limits and constraints," said Anthony Cordesman of the Center for Strategic and International Studies.

While the U.S. and Canada have fought these kinds of wars before in Afghanistan, Cordesman says the Islamic State has brought the use of human shields to a higher level.

There is no such thing as a "perfect war," he says.

The Pentagon, however, acknowledged this week the reports it has received come from various sources, including the media, non-governmental organizations and other U.S. government agencies.