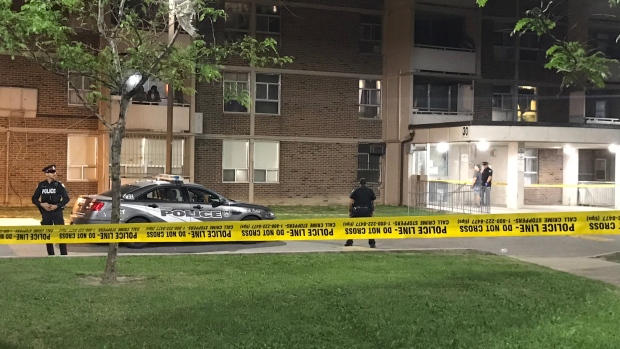 One male was rushed to hospital with serious injuries following a shooting in North York late Thursday night.

Officers responded to the area after receiving several calls about gunshots heard in the area.

When police arrived on scene, they located male suffering from gunshot wounds to his upper body.

Paramedics rushed to the victim to hospital in serious condition.

Police also say a residential building in the area was damaged by the gunfire.

Investigators have not yet released a description of possible suspects.

"We have limited information on suspects but what we do know is that the suspects were travelling in a white Honda Civic. That vehicle was last seen fleeing northbound on Jane Street from Falstaff Avenue," Inspector Mandeep Mann told reporters at the scene early Friday morning.

"At the moment, I have several units on scene, including members from 12 Division, members from our guns and gangs unit, and forensic identification services are presently examining the scene. We've also received valuable help from our special constables at the TCHC."