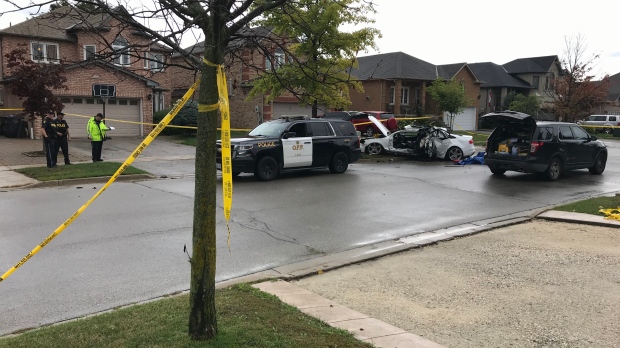 Provincial police were at the scene of a collision in Caledon that left a man dead and his twin brother injured. (Krista Sharpe)

A 24-year-old man is dead and his twin brother has been seriously injured after a car hit a tree in Caledon.

Ontario Provincial Police were called around 4:16 a.m. in the area of Landsbridge Street and Queensgate Boulevard for reports of a collision.

Police said preliminary information suggests that the car was travelling south on Sant Farm Drive approaching Queensgate Boulevard when for unknown reasons the driver lost control and struck a tree.

The driver of the vehicle died at the scene, police said. The passenger was taken to a hospital with serious injuries. He is in stable condition.

The driver has been identified by police as Jonathan Gatti from Bolton. OPP has confirmed the passenger of the vehicle is Gatti's twin brother.

"Investigators believe that speed and not wearing a seatbelt were factors in the collision," OPP said in a statement.

Anyone who may have witnessed the collision is being asked to contact OPP Caledon.