Marathon committee meetings as Liberals continue filibusters over WE documents 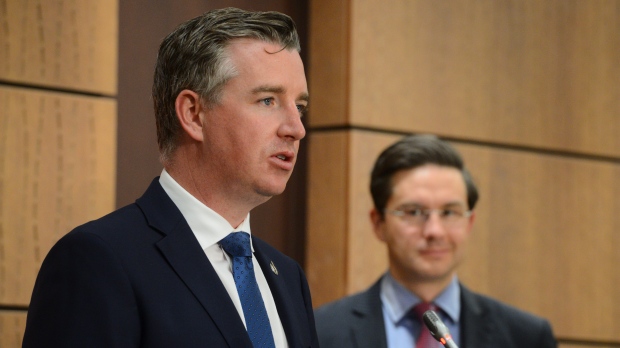 Conservative MP's Pierre Poilievre and Michael Barrett hold a press conference on Parliament Hill in Ottawa on July 29, 2020. The federal Conservatives are calling on a speaking agency through which WE Charity paid hundreds of thousands of dollars to members of Prime Minister Justin Trudeau's family to hand over documents about the arrangements. The request is contained in a letter from Conservative ethics critic Michael Barrett to Speaker's Spotlight that notes the agency was originally asked by the House of Commons' ethics committee to produce the documents last month. THE CANADIAN PRESS/Sean Kilpatrick

OTTAWA - Two House of Commons committee meetings dragged on for hours Thursday as Liberal MPs continued to filibuster opposition efforts to reopen their investigations into the WE Charity affair.

The finance committee was still droning on after eight hours of debating amendments to a Conservative motion denouncing redactions to some 5,000 pages of documents released by the government in August - just as Prime Minister Justin Trudeau prorogued Parliament, shutting down four separate committee investigations into the affair.

The ethics committee was similarly stalled, going on five hours by early evening, over a Conservative motion calling on Speakers' Spotlight, the agency that arranged speaking engagements for Trudeau's wife, mother and brother at WE events, to hand over 12 years of receipts for the trio's paid appearances.

WE Charity, which was to have been paid $43.5 million to manage a now-defunct federal student volunteering program, has already disclosed that it paid Margaret and Alexandre Trudeau more than $350,000 over the years.

Trudeau's wife, Sophie Gregoire Trudeau, was paid a one-time fee of $1,400 for an event in 2012, before her husband became prime minister.

Liberal members of the ethics committee complained that the motion is too broad, a “fishing expedition” aimed at delving into the financial affairs of the prime minister's relatives beyond their involvement with WE.

They also argued that it is wrong for MPs to investigate members of another MP's family and that the matter should be left with the federal ethics commissioner, who is already investigating Trudeau and former finance minister Bill Morneau, who also had close family ties to WE.

In the process, they read portions of the Conflict of Interest Act into the record, recounted the history of the ethics committee and embarked on lengthy digressions on entirely unrelated matters.

Liberal MP Han Dong went on at length about the government's anti-racism strategy, recounting anecdotes of Asian-Canadians who've been subjected to racism during the COVID-19 pandemic. He argued the committee - which also deals with access to information and privacy issues - should be dealing with the impact of facial-recognition technology on people of colour rather than pursuing the WE affair, on which Trudeau, his chief of staff, Morneau, the clerk of the Privy Council and multiple other public servants have already testified.

After several opposition MPs interrupted to question the relevance of Dong's digression to the motion before the committee, Liberal MP Greg Fergus, chair of the parliamentary Black caucus, intervened to suggest that the interruptions themselves were evidence of unconscious bias.

“The constant interruption â€¦ I know it's not the intent of my honourable colleagues, but it just reminds me of the micro-aggressions that a lot of Canadians of colour face. I don't hear other members being interrupted,” he said, urging them to allow Dong to continue speaking.

New Democrat MP Charlie Angus countered that if Liberals want to get on with a study of facial-recognition technology or anything else, they need only let the WE documents motion come to a vote and the committee could move on.

“I'm asking him not to play games, not to throw these heavily loaded insinuations down at my colleagues,” Angus said. “If he wants to talk about something, just bring this to a vote so we can get this thing done.”

But neither the opposition members nor the Liberals showed any signs of backing down.

Indeed, Liberal MP Francesco Sorbara, who went on at length about how wrong he believes it is to violate the privacy of another MP's mother and brother, said at one point: “I'll go back to that a thousand times over the next 24 hours if I need to.”

Angus similarly declared: “If it takes all night, if it takes all week, we will be here until the Liberals stop obstructing, stop interfering with the work of Parliament, allow us to do our jobs as parliamentarians.”

Conservative MPs accused Liberal backbenchers of embarrassing themselves by participating in a cover-up for Trudeau.

“The action of a multi-day filibuster by members of the government is a government-led cover-up,” Michael Barrett said.

Opposition members blocked several Liberal attempts to adjourn the meeting and Liberals likewise blocked opposition attempts to force a vote on the motion.

Thursday's meeting was a continuation of a standoff that stalled the ethics committee for hours last week.

Similarly, the finance committee meeting was a continuation of a meeting from last week.

Because the clock officially continues to run when a meeting is suspended, in mid-afternoon Thursday the committee reached its 180th hour of considering an opposition effort to pry WE-related documents out of the government beyond those released in redacted form in August.

Much of that time was taken up with competing points of order raised mainly by Liberal members, but also questions by Conservatives about whether the Liberals' points of order were really points of order and an attempt to challenge a ruling by Liberal committee chair Wayne Easter that the Prince Edward Island MP said couldn't be challenged because it wasn't a ruling.

Trudeau's family ties to WE Charity plunged the student grant program into controversy the moment it was announced last June. WE pulled out within days and has since repaid all money advanced by the federal government to run the program.

Four committees, including the ethics and finance committees, had launched or were preparing to launch investigations into the affair when Trudeau prorogued Parliament, bringing all committee work to a halt.

Opposition parties are now trying to reopen their investigations at the finance and ethics committees, demanding documents that each committee had already asked for before prorogation. But the Conservatives, Bloc and NDP are all also proposing, in separate motions, to create a special committee that could take over the investigation.