May home sales in Canada down 22% since last year, 9% from April: CREA 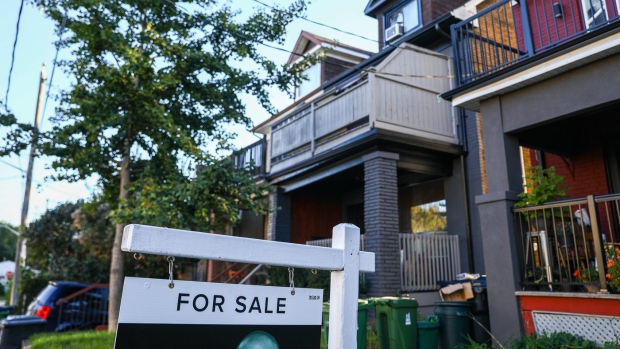 A for sale is sign is displayed in front of a house in the Riverdale area of Toronto on Wednesday, September 29, 2021. THE CANADIAN PRESS/Evan Buhler

Canada's housing market continued to cool last month with the country's real estate association finding home sales dropped by nearly 22 per cent since last year and almost nine per cent between April and May.

The Canadian Real Estate Association (CREA) said Wednesday that on a year-over-year and non-seasonally adjusted basis, sales amounted to 53,720, a fall from 68,598 in May 2021. Seasonally adjusted sales for the month totalled 42,649, down from 46,644 in April.

“Ultimately this has been expected and forecast for some time — a slowdown to more normal levels of sales activity and a flattening out of prices,” said Shaun Cathcart, CREA’s senior economist, in a release.

“What is surprising is how fast we got here."

The moderation came after the country rang in the new year with soaring prices and a torrid pace of sales that prompted provinces and the federal government to eye a suite of cooling measures.

Ontario, for example, increased a tax on non-resident homebuyers to 20 per cent from 15 per cent in March and broadened the policy to the entire province instead of just the Greater Golden Horseshoe.

But even more impactful than the patchwork of policies has been rising interest and mortgage rates, which economists attribute much of the cooling to.

"But, beginning with the (Bank of Canada)'s first nudge in interest rates, those market expectations began crumbling."

Realtors now notice prospective buyers negotiating more than they were able to in previous months, while sellers are still coming to terms with how the market has shifted and some are even holding back on listing their homes.

When Sara Rowshanbin, a Chestnut Park Real Estate Ltd. broker in the Greater Toronto Area, tells her clients they can request a home inspection, their eyes light up because most buyers had to drop the condition when the market was heated previously. Now about 50 per cent of the bids she helps place have the condition again.

However, how sellers are reacting to offers made with the cooling market in mind is "all over the place."

"Some are receiving them with open arms and saying 'let's work together on this' and others are saying 'is that a typo?' so you can tell … the market shifted very quickly," she said.

As a result, CREA found May's sales resembled the levels of activity seen in the second half of 2019, before the COVID-19 pandemic began, but noted sales decreases were steeper in April.

May sales were down in three-quarters of all local markets, led by regions like the Lower Mainland in British Columbia, Calgary, Edmonton, the Greater Toronto Area (GTA) and Ottawa.

The association now expects 568,288 properties to change hands this year, a 14.7 per cent decline from the 2021 record but still the second-highest annual figure ever. It predicted sales will edge back a further 2.8 per cent to 552,403 homes in 2023.

However, there will be little relief in prices.

Rishi Sondhi, an economist with TD Economics, interpreted the figures to mean activity is "retrenching especially hard" in the GTA, where investors have played a large role in the past year.

"It's also likely the case that some GTA buyers purchased their homes before selling their old ones (thinking the market would remain hot) and are now being forced to accept lower prices to complete their transactions," Sondhi wrote, in a note to investors.

"We would, however, expect this dynamic to run its course in relatively short order."

New listings climbed 4.5 per cent on a seasonally adjusted basis from 70,971 in April to 74,145 in May, as Montreal saw an increase in new supply.