Mayor Ford's nephew Michael to run for council in Ward 2

Doug Ford won’t be running for re-election in October, but it turns out another Ford will be throwing his hat into the ring in Etobicoke North.

Michael Ford, who is the nephew of Doug and Rob Ford, officially filed his paperwork to run in Ward 2 on Friday, joining a crowded field that already includes 10 other declared candidates.

According to his Facebook page, Michael Ford is an account executive at the Ford family business Deco Label and Tags and graduated from Richview Collegiate Institute in 2010.

Ford is the son of Rob and Doug’s sister Kathy and will be seeking to be the third member of the Ford family to represent Etobicoke North on council.

Repeated calls to Michael Ford for comment have not been returned.

Doug Ford, who is currently running his brother’s mayoral campaign, previously announced that he would not seek re-election in Etobicoke North. 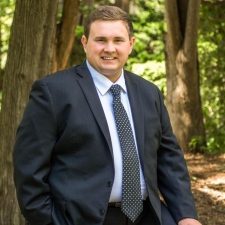 Michael Ford is shown in a picture posted to his Facebook profile. Ford has registered as a candidate in Ward 2. (Facebook)