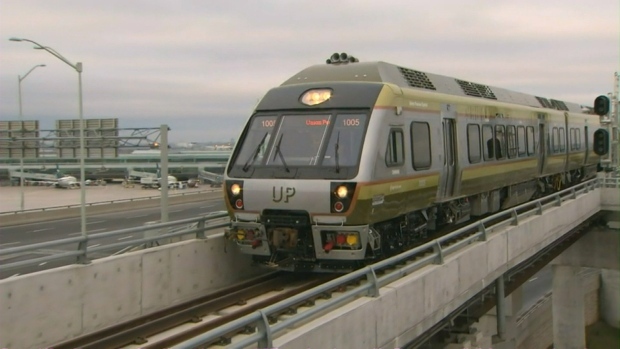 A UP Express train is seen in this undated file photo. (CTV News Toronto)

A UP Express train is seen in this undated file photo. (CTV News Toronto)

Metrolinx has scrapped plans to build an $80 million pedestrian bridge at Union Station as part of an overhaul of the Union Pearson Express but other significant changes could still be coming for the four-year-old service.

A report in the Toronto Star earlier this week, citing an internal planning document from February, revealed that Metrolinx had drawn up plans to relocate the UP Express platform to a location further south in order to accommodate an expected increase in ridership.

The document suggested that doing so would require the construction of a new pedestrian bridge at a cost of approximately $80 million.

Metrolinx spokesperson Anne Marie Aikins, however, told CP24 on Thursday that staff have since determined that the costly pedestrian bridge will not be necessary.

Aikins said that Metrolinx is continuing to study a number of other potential changes to the UP Express, including the use of electrified GO trains along the line.

The 18 existing diesel trains that run on the route were bought specifically for the role at a cost of $75 million U.S. in 2011.

That change would allow Metrolinx to double the number of trains serving the airport per hour from four to eight while providing more points of access to the service.

“We are planning for the expansion of our entire network and our vision is to implement the UP Express, as successful as it is, with the rest of our GO network so more people around the region will be able to get a fast, comfortable trip to the airport,” Aikins told CP24 on Wednesday.

Metrolinx officials have previously said that they expect the UP Express to reach capacity by 2028, making the changes necessary.

“The worst thing that we can do is to sit and enjoy how well it is doing and then 2028 comes and it is over capacity. So we are planning well in advance,” Aikins said Wednesday.