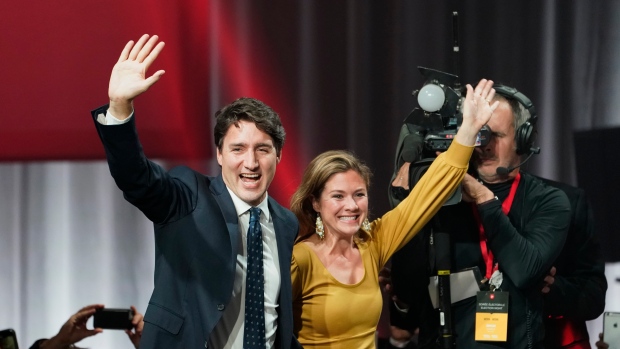 If Canada's elementary and high school students were the ones responsible for electing the country's government, this week's vote would still have ended in a Liberal minority.

A project that saw more than 1.1 million students across the country cast a ballot in a mock federal election resulted in 110 seats for the Liberals, compared with the 157 they won in the real vote Monday.

Parliament's makeup would otherwise be quite different if students called the shots, however, with the New Democrats forming the official Opposition instead of the Conservatives.

The project -- called Student Vote -- ended with the NDP winning 99 seats, the Conservatives 94, the Greens 28 and the Bloc Quebecois 9.

But just like in real life, the Tories drew the greatest share of the popular vote, with roughly 25 per cent of students supporting them.

The NDP came in a fraction of a percentage point behind the Tories, and the Grits in third place with just over 22 per cent of students voting for them.

A spokeswoman for CIVIX, which runs the program with support from Elections Canada, said it's not unusual for the mock election to reach an outcome similar to the official one.

"Most of the time it does produce the same elected government," said Lindsay Mazzucco, the organization's chief operating officer.

But she said differences in the breakdown of the results may be due to the fact that students "vote more with their heart" after examining the party platforms and prioritizing issues that matter to them.

"I think there's less strategic voting in the student vote for sure," she said.

More than 7,850 schools took part in the program this year, with the number of students involved rising by roughly 250,000, she said. Students spend hours researching each party's platform, then watch and analyze the leaders' debates, while some schools even host candidate forums, she said.

Each school organized a voting day in the last week, the majority of them between Oct. 15 and 18, though Mazzucco said some did it on Monday to coincide with the real election. Students cast ballots for candidates in the riding where their school is located.

"I'm sure that a lot of these students spend a lot more time than maybe the average voter in preparation for election day," she said with a laugh.

The program, which began in 2003, aims to give young people a chance to practice the habits of informed voting and teach them the importance of civic engagement, she said.

But the results can also provide important insights for elected officials, she said. "It gives politicians and everyone a sense to see what the next generation of voters believe and what they prioritize."

This report by The Canadian Press was originally published on Oct. 23, 2019.