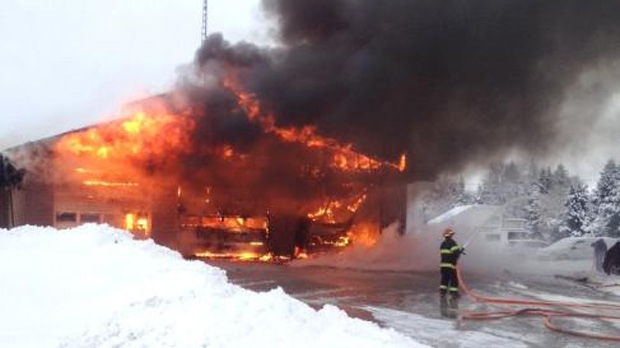 A firefighter battles a blaze at the Mount Albert fire station in East Gwillimbury Sunday, Feb. 2, 2014 in this photo distributed by the town. (Handout)

A volunteer fire station in Mount Albert has been completely destroyed by fire.

The two-alarm blaze broke out at around 8 a.m. and quickly spread throughout the building.

Crews were then able to get the fire under control a few hours later, but at that point the building was a total loss.

"This is a significant loss to our community and to the firefighters of the Mount Albert Fire Station," East Gwillimbury Mayor Virginia Hackson said in a news release.

Hackson said safety remains a priority for the community and she thanked first responders who helped attend to the blaze.

It is believed that six fire trucks were destroyed in the blaze, including a new pumper.

Nobody was inside the fire station at the time.

The cause of the fire has not yet been determined.

East Gwillimbury is served by two other fire stations, the town said in a  news release.