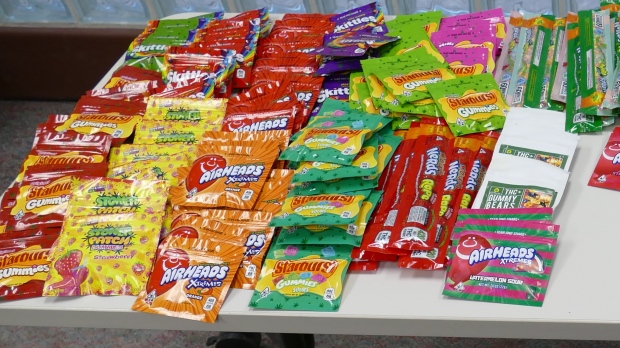 Some of the cannabis products seized from a Markham convenience store on Feb. 18 are shown. (York Regional Police)

Police have issued a warning to parents following an investigation into the alleged sale of cannabis products to children at a Markham convenience store.

Police first began an investigation into Angus Glen Convenience on Kennedy Road south of Major Mackenzie Drive East in January after a concerned citizen contacted them with an allegation that the store was selling cannabis products to groups of children who “appeared to be well under the age of 19.”

Police then executed a search warrant at the business on Feb. 18 and seized a large quantity of cannabis edibles, disposable cannabis vape pens and cannabis seeds with a estimated street value of $10,000.

Police say that many of the cannabis products that were seized “look similar to candy products that are made for and marketed to children.”

They also say that many of the products were not properly labelled and did not provide instructions about dosage.

“Police are warning parents to ensure children have no access to these harmful products and if appropriate, warn their children these products are not candy,” police said in a news release issued Tuesday morning.

The store manager and another store employee were both arrested following the execution of the search warrant and have been charged with possessing cannabis for the purpose of selling under the Cannabis Act, according to police.