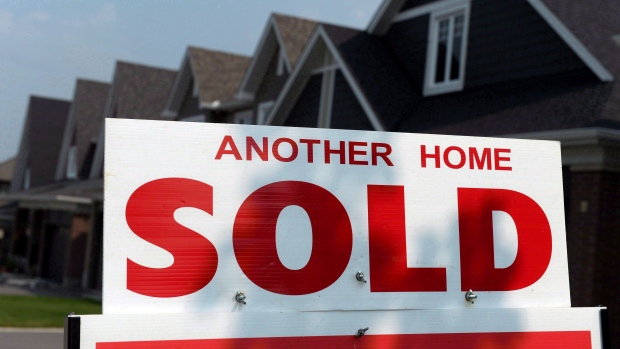 A for sale sign displays a sold home in a housing development in Ottawa on July 6, 2015. THE CANADIAN PRESS/Sean Kilpatrick

OTTAWA -- Real estate prices may be showing signs of easing but Canada's housing market remains "highly vulnerable," according to the Canadian Mortgage and Housing Corporation.

The federal agency says that stricter mortgage rules, rising interest rates and smaller growth in inflation-adjusted disposable income has led to less demand for housing and a decline in prices.

Despite these factors, markets in Toronto, Vancouver, Victoria and Hamilton are still considered to have a "high degree of overall vulnerability" even though house prices are getting more in line with housing market fundamentals such as income, mortgage rates and population.

CMHC says it sees vulnerability as imbalances in the housing market, attributed to overbuilding, overvaluation, overheating and price acceleration.

It gives an example of a vulnerable housing market, like what happened in the 1980s and early 1990s in Toronto when a housing bubble caused real estate prices to skyrocket in a short span of time.

The agency's report noted that there continues to be overbuilding -- where rental vacancy rates or inventory of unsold new-builds are higher than normal -- in Edmonton, Calgary, Saskatoon, and Regina.

It says Winnipeg is particularly concerning, as inventory of newly completed but unsold units have been accumulating for the past two quarters.

Meanwhile, housing prices in Montreal continue to be at levels equal to economic and demographic activity, but nevertheless the resale market "close to overheating" as demand begins to outstrip supply.

The agency made the findings in its quarterly Housing Market Assessment report, which is meant to gauge the stability of the national real estate market.