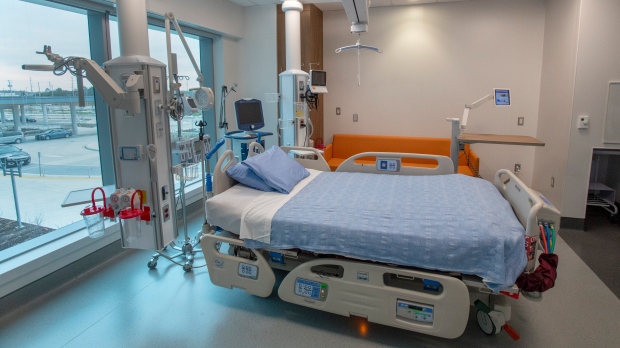 TORONTO -- Modelling suggests Ontario intensive care units could be treating around 200 COVID-19 patients by January, but the head of the agency overseeing the health system says a provincewide reduction in services is less likely to happen during this wave of the pandemic.

Dr. Chris Simpson, medical vice-president of Ontario Health, told The Canadian Press that the trigger point at which hospitals would be ordered to ramp down non-urgent procedures is now closer to 250 or 300 intensive care patients.

That's up from the threshold of 150 patients the government cited a year ago as the point at which surgery cancellations and other measures might need to be taken to keep the health system running.

Such measures were enacted already during the pandemic in Ontario, most recently in April as the hospital system responded to a particularly deadly third wave.

Intensive care occupancy has now been hovering at around 130 patients for weeks, with 137 people in critical care as of Wednesday. But despite some strain on local hospitals, “it really hasn't had any negative impact that we can detect from a system level,” Simpson said.

“The number now is probably more like 250 or 300 (patients) before we'd start to see some systemic impacts, and by that, I mean a strategic direction to start ramping down nonurgent procedures provincially,” Simpson said.

Now, health human resources is the largest “rate limiting step” for intensive care capacity that might overwhelm hospitals, Simpson said, as facilities contend with low staff numbers, and burnout and distress among those who remain.

Recent predictions from Ontario's COVID-19 Science Advisory Table highlighted uncertainty about the trajectory of the rising infection curve in the province, which began late last month as capacity limits dropped in many public spaces and the weather cooled off, sending people to mingle indoors.

Intensive care admissions and hospitalizations are considered lagging indicators that follow rises in COVID-19 cases. The expert group's models placed intensive care occupancy likely at around 200 patients by January, with 250 patients also in the range of possibilities.

Simpson said variables like booster doses for more people and vaccinations for younger children will need to be watched as the trends play out, noting again that vaccinations may keep people from getting as severely sick this time around.

“You plan for the worst, but I think there's some reason to believe that this won't be as impactful as previous waves as far as the impact on the ICUs,” he said.

Simpson said it's more likely for surgery cancellations to be localized and rescheduled within a few weeks, as opposed to provincewide cancellations with no set rescheduled date, representing a “different kind of pressure” than earlier in the pandemic.

Some hospitals are already contending with strain from rising COVID-19 case and have signaled procedure cancellations might be necessary. Ontario Hospital Association CEO Anthony Dale pointed to facilities in Sudbury, Sault Ste. Marie and parts of southwestern Ontario that are experiencing “unusual, heavy pressures due to large numbers of COVID-19 patients.”

“Mitigating actions, including patient transfers in some instances, are being taken by these organizations,” he said in an emailed statement.

He said hospitals will monitor the situation through the winter, saying “hospital capacity, in particular ICU capacity, is not something we can take for granted in a pandemic, as case numbers can change with lightning speed.” Dale asked people to get vaccinated and follow public health guidance.

Systemwide strain has played out in some Canadian jurisdictions that struggled with infection spikes well after vaccines became available. A fourth-wave COVID-19 surge in Alberta led to 15,000 surgery cancellations and a call for help from the military this fall.

Saskatchewan is still in the process of restarting hundreds of health-care services that were halted during its deadly fourth wave, including organ donations and home care.

Simpson said such situations show how it's not impossible for COVID-19 to impact health services even at this stage of the pandemic.

“The COVID numbers, if they do go north to the point where we've got a lot of patients with COVID in hospitals again, it will have an impact. We saw that it did last time and it will again,” he said. “We have to say what we say today with a lot of caution.”