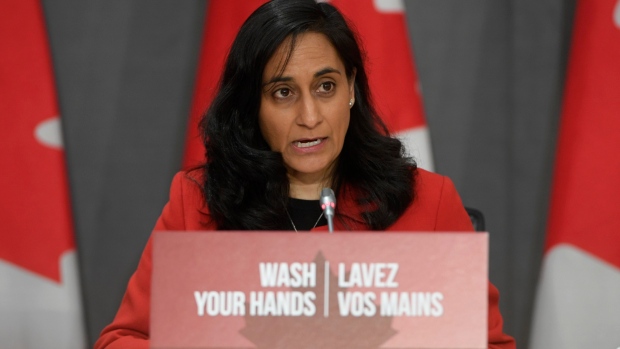 OTTAWA -- Quality problems with medical supplies bought from other countries should not be a surprise given the global surge in demand, says Procurement Minister Anita Anand.

"We have had some quality issues with supply that have not met our standards set by the Public Health Agency of Canada," Anand told a House of Commons committee Friday.

"Quality issues, while unwelcome, should not be unexpected given the surge in global demand for these goods. I can tell you that while we are buying at a faster pace, our priority remains making sure we get safe, effective supplies to health-care providers."

Canadian authorities recently discovered one million protective face masks imported from China were inadequate for health-care workers. The Public Health Agency of Canada said the masks didn't meet its standards and they will not be distributed to provinces as planned.

These masks were billed as meeting "KN95" standard, the Chinese equivalent of the American N95 standard.

Anand stressed that federal health officials are inspecting all incoming imported equipment before it is distributed across Canada. Inspections are done both at the source in China and again by the federal public health agency.

"We are taking every precaution to keep Canadians safe," Anand said.

Deputy Prime Minister Chrystia Freeland has described the global competition for critical COVID-19 equipment as a "Wild West," while health workers in hospitals and nursing homes across Canada and around the world continue to raise concerns about shortages.

Much of the world's supply of these materials is in China, and moving equipment from that country is highly complex, Anand said.

Two planes from China were forced to return empty to Canada on Monday -- one a federal charter and the other destined for a particular province -- without the protective medical equipment that they were sent there to pick up.

Those goods have since arrived in Canada, Anand said.

Canada is now taking new logistical and diplomatic approaches on the ground to ensure critical COVID-19 supplies that are ordered make it here, she added

This includes building in contingencies and over-buying supplies in some cases.

The government has asked Canadian companies to ramp up their efforts to make protective equipment such as surgical masks, gowns, hand sanitizer and ventilators, but in the meantime Canada still needs to bring in supplies from other countries.

Six planeloads of supplies have been received from China since last Friday, and 10 planes from China have returned to Canada with COVID-19 supplies overall.