A house, truck and possibly some cows are what James Wickman and his wife, Eerikka, plan to buy with their massive $65 million Lotto Max jackpot prize.

The couple from Hearst, Ont., along with 22 members of their family, drove 10 hours to collect their prize on Wednesday morning in Toronto.

“We left at 5 o’clock last night from Hearst to get here for 8 o’clock this morning,” Wickman said.

Wickman said he was driving when he heard on the radio that the winning ticket from the Sept. 8 draw was sold in the Timiskaming/Cochrane region.

“So, I went home, got my ticket, put my scanner [from] my phone [to the ticket] and it came up in big letters on the screen, no bells and whistles, just the big letters,” Wickman said to reporters while collecting his cheque on Wednesday. “And it said congratulations, you have just won $65 million.”

When Wickman told his wife about hitting the jackpot he said she didn’t believe him. So Wickman went to town to get his ticket verified, and sure enough he once again saw the big letters saying he won. 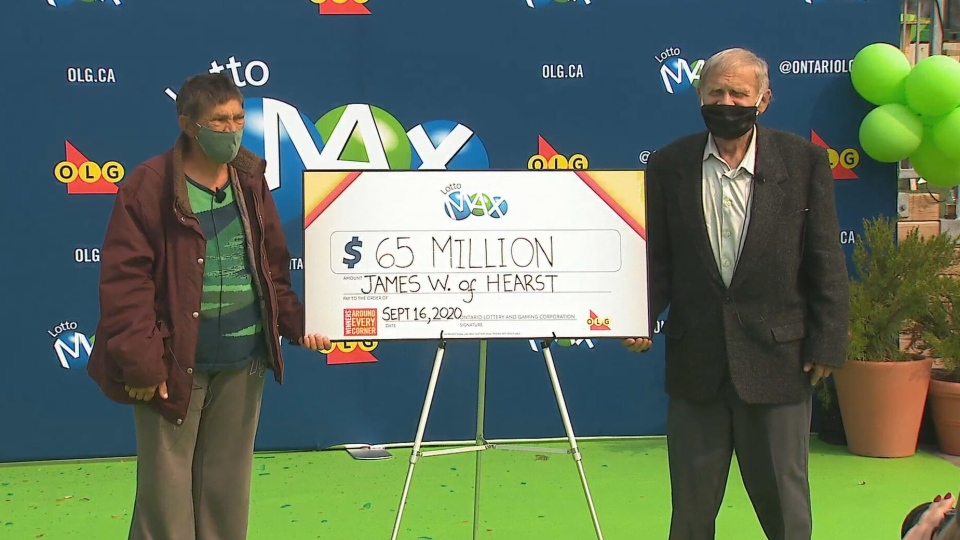 The winning ticket was purchased at the Canadian Tire Gas Bar on Front Street in Hearst.

Wickman is a regular lottery player, buying one or two tickets a week.

The biggest prize Wickman ever claimed before his Lotto Max win was in 1972 when he won $5,000 in a gas station contest.

As for what Wickman and his wife plan to do with the millions, their number one priority is helping their four children and 11 (soon to be 12) grandchildren.

“What are we going to do with it? Anything we want,” Wickman said. “House, truck, car, keep our children happy, and then for the next $64 million…”

“Investments,” Eerikka added. “I’d like them [children] each to have their own homes, no debt, education fund for their kids, you know, that would be nice. Whether they work or not that’s their choice.”

The couple didn’t say they would splurge on anything with their winnings but Eerikka did add that she might buy some farm animals.

“I want a cow!” Eerikka said enthusiastically. “Well, I’d like to have a little hobby farm.”

The retired couple plans to continue living in Hearst even throughout the harsh winters.

“We love the snow,” Wickman said. “You can always dress warmer in the winter but in the summer you can only take so much off,” he joked.

Since Lotto Max launched in September 2009, players have won over $5.7 billion across the province, according to the Ontario Lottery and Gaming Corporation.