Officers remain on-scene at a townhouse complex in Mississauga after a violent incident left a 30-year old man dead and three others wounded, including two polices officers.

A 21-year-old woman, who says she was struck by a stray bullet, is among the injured, CTV News has learned.

Officers were called to 3070 Queen Frederica Drive, near Dundas Street and Dixie Road in Mississauga, around 10:40 p.m. Friday night.

"Shots were fired during some kind of an altercation and I know that as a result of that altercation, the two officers did suffer serious injuries," Const. George Tudos told CP24 at the scene Friday night.

Both of the officers suffered stab wounds, the Peel Regional Police Association said Saturday. One of the officers was also shot, but was wearing a bulletproof vest. Both have since been released from hospital.

According to police, one male civilian was pronounced dead at the scene. In a news release Saturday morning, the province’s Special Investigations Unit identified him as a 30-year-old man and said the agency is investigating his death.

The young woman who was injured during the altercation told CTV she was taken to hospital after being hit by a bullet that came through her window. She said she was standing at her kitchen counter when she was struck in the back. She is now recovering at home but says the bullet is still lodged in her body.

The SIU and paramedics confirmed that a civilian suffered non-life-threatening injuries during the altercation and but did not confirm the person's gender or age. They also did not say how the civilian was injured.

Police also would not say why officers were called to the scene in the first place.

"We are not going to be getting into the details as to what the type of call it was or the events that led to the shooting incident."

Police say no suspects are outstanding.

"At this point, everybody we believe has been accounted for that was involved in the altercation here," Tudos said.

"We have numerous officers here and we are going to be obviously looking for witnesses and asking them to come forward."

The SIU is probing the incident, as is protocol whenever civilians are seriously injured or die while in the presence of police. The watchdog group said it has assigned five investigators and three forensic investigators to look into the incident.

"At this point we are still investigating what took place, exactly what transpired, and we'll be working alongside the SIU to determine exactly what happened here tonight," Tudos said.

Speaking with CP24 Saturday morning, area residents said they were shocked and overwhelmed by the mass police presence that descended on their area.

“It was scary,” neighbor Rachel Firlott told CP24. “I was watching TV in my living room around 10:30 and I heard screaming so I went to look out my window to see who was fighting and then I heard pop, pop, pop , pop – like ten gunshots.”

She said she then saw a man on the ground and saw a police officer fall to the ground before a scene of chaos unfolded around her.

“It was just pandemonium – ambulances, police just everywhere. I’ve never seen so many police officers in one spot,” she said.

Another neighbour told CP24 that she had never seen anything like it before.

“I had never heard gunshots in my life before, so I wasn’t really sure what it was,” area resident Imade Igbinovia told CP24.

She added she was worried about the fact that there are lots of kids who regularly play outside in the area.

“There’s a lot of young children that live here. There’s a playground behind my house and that worries me for them,” she said.

Large swaths of the townhouse complex remained closed off by police tape Saturday afternoon as forensics officers swept the scene.

Officers are expected to remain at the scene into the afternoon. 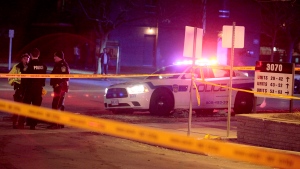 Photos from the violent scene in Mississauga.

Peel Regional Police cars are pictured at the scene of a violent incident in Mississauga that left one man dead and two officers injured. (Travis Dhanraj /CP24)

Two officers were seriously injured and one civilian is dead following a shooting and stabbing in Mississauga on Friday night. (John Hanley/ CP24)