Despite his claim to the contrary, Mayor Rob Ford was never told the residential property tax hike in the 2014 budget would be kept to 1.75 per cent, City Manager Joe Pennachetti says.

Pennachetti made the comment to CP24 on Wednesday in the wake of Ford telling reporters earlier this week that the property tax hike was “locked in at 1.75” and was only bumped to 2.5 per cent after council voted to strip him of many of his powers.

After the 2014 operating budget was presented to the budget committee on Monday, Ford held an impromptu scrum with reporters where he called the $9.6-billion budget “absolutely atrocious” and vowed to vote against it. City staff members drafted the budget and recommended its’ adoption.

Pennachetti said the mayor did indeed push staff to keep the property tax increase to 1.75 per cent, but in the end, keeping the increase below 2.5 per cent was just not possible.

The tax hike includes a 0.5 per cent increase which would be used to help fund an estimated $400-million shortfall in the extension of the Bloor-Danforth subway line into Scarborough.

“There is no doubt that the mayor was clear to the budget chief and to me that he would have liked to see 1.75, but the bottom line was that if we went further we felt that we would have to cut services too much,” he said. “The mayor disagrees, but we have yet to see where those savings would come from.”

Pennachetti said that about “three quarters” of the divisions under his control had their budgets frozen this year while the TTC and emergency services received modest increases.

The proposed budget is expected to be considered during the Dec. 16 and 17 council meeting.

“From a staff perspective we believe we have cut as much as we can,” Pennachetti said. “That doesn’t mean that the budget committee and councillors can’t come up with some other ideas, though.”

Budget Chief Frank Di Giorgio has previously suggested that it would be practically impossible to limit the 2014 property tax increase to 1. 75 per cent, but Mayor Ford has claimed that further efficiencies can be found and on Wednesday his office released a statement suggesting that he remains committed to finding those efficiencies.

“The Mayor and his staff have been in constant communication with a number of city divisions and are reviewing Monday's budget presentations with city staff, as they continue to advocate for Toronto taxpayers and keeping taxes as low as possible,” the statement read. “The Mayor is continuing to explore avenues to reduce the proposed 2014 tax increase.”

While Ford has publicly ncriticized the budget, it is not known what discussions, if any, he has had with staff and other councillors as he works to reduce the proposed tax increase.

Speaking with reporters at city hall Wednesday, Deputy Mayor Norm Kelly said he hasn’t spoken to the mayor about the budget and was not aware of any discussions Ford has had with city officials.

Kelly did, however, leave the door open to Ford and others to come forward with suggestions on how to bring the proposed tax increase down.

“A lot of time has been put into the budget and it may not have produced the results (Ford) was looking for, but it is not because a lot of people didn’t think about the budget and reach the best conclusions they could based on the evidence they had,” Kelly said. “That said, I am open to all the other recommendations that might be out there but I caution people to make it as specific as possible, to get it out of the realm of generality and strip it of emotion.”

While Ford has not yet made specific recommendations on how the budget can be cut, his brother, Coun. Doug Ford pointed to the TTC’s recent hiring spree, saying savings can be found in labour costs.

“We are focused on driving down the costs and meanwhile we have 479 people being hired at the TTC just as an example,” he told CP24’s Stephen LeDrew Wednesday. “Is the TTC any faster? Is the TTC any cleaner? Is the TTC any safer? No it is not,” Ford said. “I feel sorry for (TTC CEO) Andy Byford. He is stuck between a chairperson that wants to hire and spend and increase fares and a mayor that wants to run things more efficiently, not hire a whack more people and build subways.” 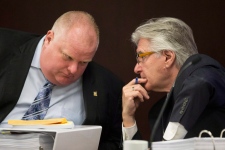