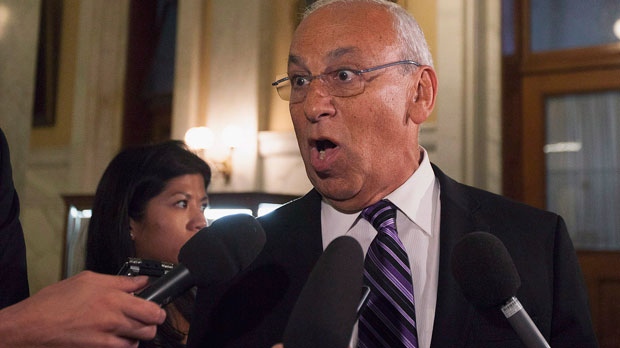 TORONTO -- Ontario's Liberal government accused the Progressive Conservatives Wednesday of trying to reopen the abortion debate after three Tories sponsored a news conference at the legislature to stop public funding of the controversial procedure.

It only takes one MPP to sponsor an event in the legislature's media studio, so having Conservative MPPs John O'Toole, Randy Hillier and Rick Nicholls all sponsor an announcement by Campaign Life was a clear attempt to reopen the abortion debate, said Laurel Broten, the minister responsible for women's issues.

"If we look at the track record in Ottawa, where we have seen Prime Minister (Stephen) Harper distance himself from the issue but at the same time allow backbench MPs to drive an agenda forward, that we can see what perhaps the plan is here," Broten told reporters.

None of the three Tories who sponsored the Campaign Life news conference attended the event or responded to calls requesting comment.

Premier Dalton McGuinty has made it clear he and his government are pro-choice, but voters should question where PC Leader Tim Hudak stands on abortion, added Broten.

"Last year, (Hudak) indicated that he did not intend to advance efforts to reopen the debate about women's right to choose in the province, but unfortunately today there were certainly strong efforts made by three of his caucus colleagues to reopen that very debate," she said.

Hudak was not available to comment Wednesday, but Conservative finance critic Peter Shurman insisted the debate on abortion "is closed," and the opposition has no plans to revisit the issue if they form government after the next election.

"We have 36 people with 36 sets of opinions and long ago, at the federal level, it was established that people could hold personal opinions on a range of subjects, and one of them was abortion," Shurman told reporters.

"It's not something that is up for discussion, and my colleagues are acting entirely on their own."

Hudak admitted last year that he had signed an anti-abortion petition in the past, but insisted at the time that he had no plans to reopen the debate if he becomes premier.

The NDP said they believe in a woman's right to choose, and warned there are factions in both the Tory and Liberal caucuses that are strongly anti-abortion and want to stop funding it.

"The sad reality is it's not just the PCs it's also the Liberals, and many Liberal members have also supported this initiative," said New Democrat Cheri DiNovo.

"We find that very sad. This is 2012, we should be beyond that discussion."

Campaign Life announced it will hold protests outside the offices of at least 41 MPP's across the province Saturday to demand they end coverage of abortion under the Ontario Health Insurance Plan.

"They will demand that their MPPs work to defund abortion, which is an elective procedure that is done today for reasons of convenience as a back up birth control method," said Alissa Golob, Campaign Life's youth co-ordinator.

The group opposes public funding for abortions under any circumstances, and said there's never a situation where the procedure would save a mother's life.

"Taxpayers are fed up with turning over their hard earned cash to finance a controversial, medically-unnecessary procedure," said Jack Fonseca of Campaign Life.

"It's one thing for an individual to make a personal choice to kill a baby in the womb, but it's quite another to expect the rest of us to co-finance that."

Broten also said publicly-funded Catholic schools in Ontario should not be teaching students that abortion is wrong because the anti-bullying law prohibits misogyny.

"Taking away a woman's right to choose could arguably be considered one of the most misogynistic actions that one could take," she said.

"I don't think there is a conflict between choosing Catholic education for your children and supporting a woman's right to choose."

Campaign Life, which uses a red-yellow-green traffic light system to show whether politicians support their efforts to delist abortions, also plans to hold a mass rally outside the legislature Oct. 30.