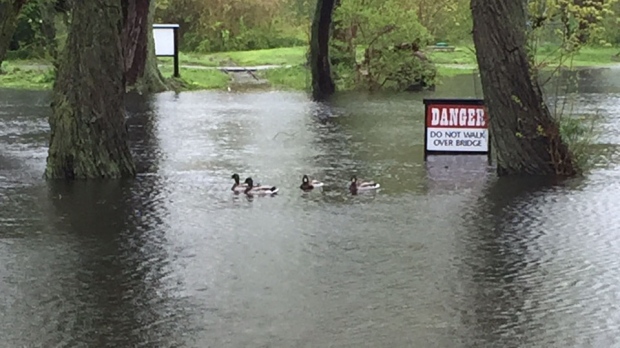 Ducks and carp have overtaken swaths of flooded parkland on Toronto Islands as it gears up for a different summer due to rising lake levels. (CP24)

Flood-ravaged Toronto Islands took a further beating during Thursday’s record rainfall, which drowned more than half the island.

The additional barrage of rain has “substantially compromised” these already flooded areas, the city said.

The heavy rainfall is the wettest May 25th since precipitation levels started being recorded in 1938, Environment Canada said. According to the weather agency, 54.8 millimetres of rain fell through the day.

Since the beginning of April, Toronto has been bombarded by showers – receiving a total of 236 millimetres of rain, which is nearly 60 per cent more than average, according to CP24’s meteorologist Bill Coulter.

Though an emergency evacuation of the island's 700 residents was never deemed necessary, regular ferry service to Centre Island and Hanlan’s Point is suspended until further notice and all event permits have been cancelled until June 30.

City officials are now saying it is “unlikely” it will reopen to the general public by then, as carp are swimming over swaths of flooded parkland due to high water levels and the flood damage has wreaked havoc on infrastructure, threatening more than 300 buildings.

The combination of the islands’ low elevation, heavy rains and wind-blown waves off Lake Ontario continue to submerge the city park, according to the Toronto and Region Conservation Authority’s waterfront specialist Nancy Gaffney.

“Some of the water’s coming up through the ground, some of it is the result of wave action and wind,” Mayor John Tory told reporters earlier this month.

More than 30,000 sandbags now line the shoreline while residents are forced to trudge through submerged sidewalks in knee-high rubber boots. Road access across the island is also closed to residents.

“Pumps are being used at full capacity in the residential community, but it is unable to keep up with the heavy influx of water,”

Lake Ontario is expected to rise in weeks ahead

City crews are still stationed on the island and are continuing to tackle ongoing flood concerns.

"They’re monitoring the conditions very closely," city spokesperson Wynna Brown said Thursday. "We do know that lake levels are very high this year so we’re keeping a close eye over there."

Last week the agency responsible for monitoring water levels, International Lake Ontario-St. Lawrence River Board, reported that Lake Ontario was 84 centimetres higher than normal. This is the highest it has been since 1998, the agency said.

Environment Canada says rain will begin to move in on Sunday, lasting until Wednesday.

City crews work to fill sandbags on May 5 as the GTA is hit with a second full day of steady, heavy rainfall.