Mayor John Tory says he has signed a new bylaw ordering people who do not live together to stay at least two metres apart in all public parks and squares.

The mayor made the announcement on Thursday afternoon at city hall during the city's daily COVID-19 briefing.

Tory said as it currently stands, anyone who does not obey the new bylaw could be subject to a fine of up to $5,000, noting the city is working to get permission to set the fine at $750.

He said the purpose of the bylaw is to “drive home” the message that people must stay away from each other to slow the spread of COVID-19.

“This is a deadly virus that has already tragically claimed the lives of Toronto residents, Tory said. “Given the surge in cases and deaths that we have seen in places like New York and Italy, we must do everything we can to stop the spread of COVID-19 now to save lives in the weeks and months ahead.”

Tory said the bylaw will be in effect for at least 30 days.

During Thursday's news conference, the mayor expressed his frustration at people who continue to ignore the city's orders, saying that some are even “flocking” to parks and closed playgrounds to gather and play sports.

“This will further the spread of COVID-19 in our city and will contribute to the costing of lives… Not only does this misbehavior on the part of a small number put people's own health at risk, it puts their families at risk and all of our families across the city for that matter,” he said.

“It will also prolong this terrible emergency and the damage it is doing to the lives of residents, to their employment, and to their finances, prolonging this trauma for many more months. Why would we want to do that?”

Tory said that if two or three residents of the same household want to go to the park together, it is "perfectly OK" as long as they stay two metres away from others who do not reside with them.

"We are not saying to people, ‘Don’t go to the park,'" Tory said. "We are just asking for people to engage in common sense behaviour."

Tory said enforcement of the new bylaw will begin right away.

"The public has been warned many times," the mayor noted. "Now it is into the realm of enforcement."

Police Chief Mark Saunders said there will be about 160 uniformed officers dedicated to enforcing the orders made by the city in response to the pandemic. Civilian members of the police service as well as bylaw officers will also undertake enforcement and education duties, he added.

Last week, the city shut down all facilities within Toronto’s more than 1,500 parks, including playgrounds, off-leash dog areas, and outdoor sports facilities, and several private landlords have followed suit.

But on Wednesday, dozens of people were caught using a running track at North Toronto Collegiate Institute by jumping over a locked gate and dozens of cars were seen parked in a parking lot at Sunnyside Beach despite the city ordering the closure of all lots at parks and beaches. 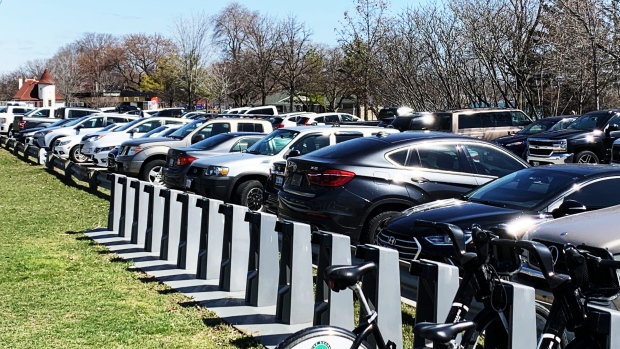 “We will turn up the heat in the hopes that the few who still don't get it or pretend not to get it will get with the program,” Tory said Thursday.

“We will continue to do everything we can as a municipal government to lock the city in order to save lives…To do less would be to ignore the lessons of New York City, where in the past two days almost 200 people have died bringing the total to 1,374 death in just over a couple of weeks.”

The new bylaw was announced just one day after the city’s medical officer of health told residents of Toronto to be prepared to stay indoors for up to three months.

During a news conference on Wednesday, Dr. Eileen de Villa said people should only go out to shop for essentials once a week and urged people to stay indoors unless they need to walk their dogs, go to medical appointments, or get daily exercise.

Mount Pleasant Cemetery closed due to lack of physical distancing

The Mount Pleasant Cemetery has closed its gates after a local councillor says social distancing rules are not being followed.

The cemetery that stretches from Yonge Street to Bayview Avenue will be closed starting Thursday night.

"The decision was not made lightly, but it has become necessary," a post on the website of the cemetery's management reads. "We value your understanding during these challenging times.

The Mount Pleasant Cemetery has had to decide to close its gates to the general public immediately. It was a very difficult decision for them to make. It was taken to protect public health, as too many people walking there were not adhering to safe physical distancing.

Speaking to CP24 Thursday night, Coun. Josh Matlow said the cemetery has become a place to escape, especially during these times when people are in their homes.

He said it is where midtown residents go for a walk and get some fresh air. There are three different walking and running routes in the cemetery.

"The cemetery had to make this decision to close their gates immediately because far too many people have not been adhering to safe, physical distancing," Matlow said.

The Toronto-St. Paul's councillor, who was in self-isolation for two weeks after becoming in contact with a positive case, said people who aren't following guidelines from public health are being selfish.

"They're being idiots. They're not considering the lives and the wellbeing of other people and the Mount pleasant cemetery had to make a decision due to that misbehaviour."

"If you leave your home and you should stay at your home as much as possible, but if you need to get a workout or walk your dog, consider everybody around you as though they might have the virus."

Up to 60 Ontario pharmacies to begin offering COVID-19 tests by end of week: Ford

Why Ontario's COVID-19 spike has yet to prompt another lockdown

Out-of-bounds ball hockey nets are seen in a park in downtown Toronto on Wednesday, April 1, 2020. The city has seen increasingly stricter measures to ensure social distancing in the fight against COVID-19. THE CANADIAN PRESS/Colin Perkel