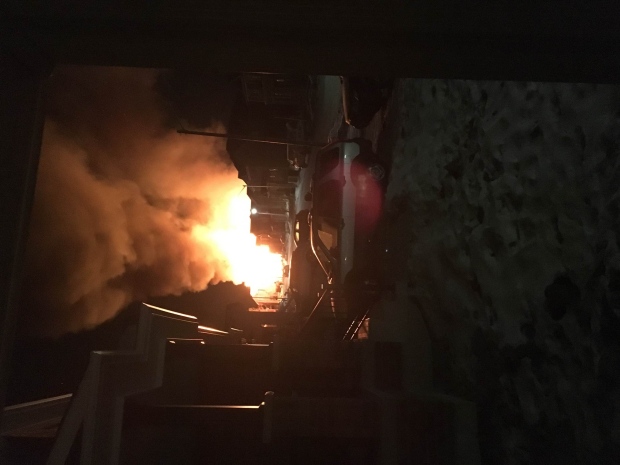 Flames are seen at the site of a multi-structure fire in Bradford West Gwillimbury on Friday. (Taylor Giberson)

Multiple under construction homes were destroyed after a large fire in a Bradford West Gwillimbury neighbourhood on Friday morning.

The fire broke out near Line 6 and Melbourne Drive at around 5 a.m.

According to Fire Chief Kevin Gallant, crews arrived to the scene to find two fully engulfed homes however the blaze soon spread to three other properties.

“When our first crew got here two houses were going but they were in the framing stage so the fire spread quickly,” he said. “Our main priority was to not let the fire extend to any of these new houses that have been finished.”

According to police, several nearby homes were evacuated as a result of the blaze and displaced residents were loaded onto a bus that was brought to the scene.

The Office of the Ontario Fire Marshal has been notified and will investigate the cause of the fire.