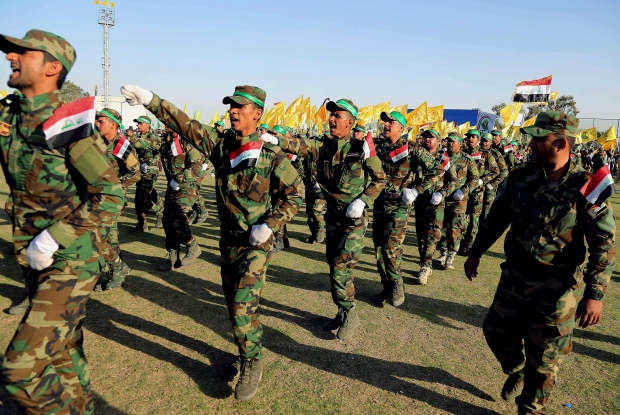 Iraqi Shiite militiamen protest against the Saudi-led military campaign in Yemen, during a rally in Baghdad, Iraq, Saturday, April 4, 2015. A Saudi-led coalition continued to carry out intensive airstrikes overnight and early Saturday morning targeting positions of Yemen's Shiite rebels known as Houthis in north and east Aden. The airstrikes continued in the Houthi stronghold of Saada in the north of Yemen. (AP Photo/Karim Kadim)

OTTAWA -- The federal government is confirming that an undisclosed number of Canadians have been taken out of Yemen, amid Russian state media reports that the Kremlin had helped them leave.

Foreign Affairs spokesman John Babcock said in an email on Saturday they are aware that Canadians departed from Yemen safely.

China's Xinhua news agency reported Saturday that a Chinese warship took some 225 foreign nationals out of Yemen including one Canadian and took them to Djibouti in East Africa.

Babcock would not confirm Russian involvement, but said Canada's ability to provide any consular assistance in Yemen is "extremely limited."

Babcock also said Foreign Affairs has been advising Canadians against all travel to Yemen since 2008.

It's estimated more than 500 people have been killed in Yemen in the past two weeks amid fighting between government forces and Shiite rebels.

The reported Russian assistance to Canadians in Yemen comes amid recent tensions between Canada and Russia over the conflict in the Ukraine.