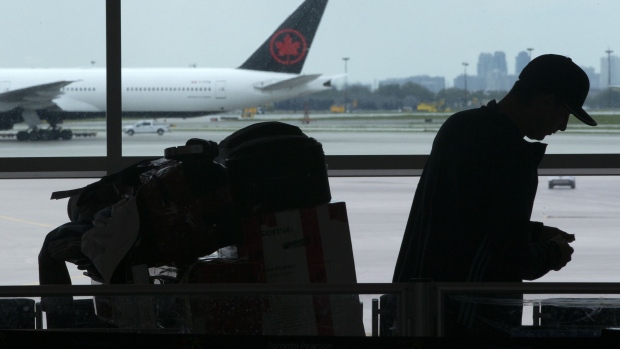 A passenger waits beside their luggage at the departure terminal at Toronto Pearson Airport, in Mississauga, Ont., Friday, May 24, 2019. Starting today, airline passengers can receive up to $2,400 if they are bumped from a flight, part of a slew of air traveller protections beefing up compensation for travellers subjected to delayed flights and damaged luggage. THE CANADIAN PRESS/Chris Young

MONTREAL -- Airlines now have to reimburse passengers for flight bumping and damaged luggage as part of a package of new protections that take effect today.

The regulations require prompt updates and clear communication with passengers about their rights if their flight is delayed or cancelled.

In the event of a tarmac delay, aircraft must return to the gate after no more than three hours and 45 minutes.

The issue came to the forefront after a 2017 incident in which two Montreal-bound Air Transat jets were diverted to Ottawa due to bad weather and held on the tarmac for up to six hours, leading some passengers to call 911 for rescue.

The new rules have been met with blowback from both industry and consumer rights advocates.

Air Canada and Porter Airlines Inc. are among the carriers asking the Federal Court of Appeal to quash the new rules, which they say violate international standards.

Passenger rights advocates say the rules do not go far enough, arguing the criteria for monetary compensation are difficult for passengers to meet as they would have to present evidence that is typically in the hands of an airline.

Compensation of up to $1,000 for delays and other payments for cancelled flights will take effect in December.