We just get the runaround,' residents say of water problems in Ontario hamlet 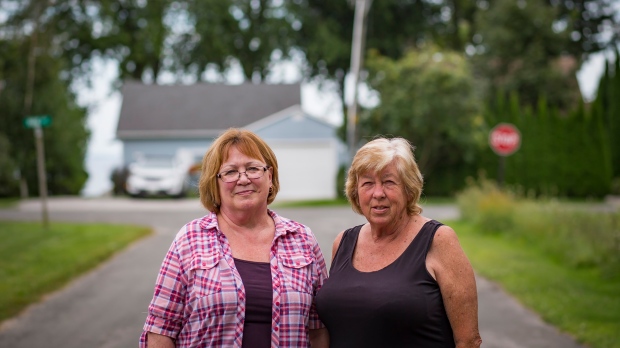 Community organizers Brenda Himburg, left, and Janette Nichols, on Bayview Avenue in the community of Booth's Harbour, Tuesday, September 3, 2019 in St. Williams, Ont. Approximately 100 private residents who's water is controlled by the owner of Booth's Harbour are complaining of poor water conditions, including negative water pressure, a bleach smell to their water and a lack of water testing for lead. THE CANADIAN PRESS/Tara Walton

NORFOLK COUNTY, Ont. -- Brenda Himburg is livid, but in a polite way.

The resident of Booth's Harbour, Ont., is angry that no one has listened to her or her neighbours about the water problems that have plagued the hamlet for years.

"We just get the runaround," she says with a sigh as she looks out onto the expanse of water from the backyard of her home on the north shore of Lake Erie.

"I'd like to use stronger language, but that wouldn't be nice."

Residents of the tiny community say the drinking water in their homes looks yellow and sometimes smells of bleach. Water pressure is abysmal.

"We get that whiff of Javex a lot," said Janette Nichols, Himburg's neighbour and self-described "sidekick."

Residents of Booth's Harbour pay taxes to Norfolk County, but their homes are on a private water line owned and operated by Booth's Harbour Development, a business run by Scott Booth. The company also owns a nearby marina and trailer park.

The system -- known in government parlance as a "non-municipal year-round residential drinking water system that is privately owned" -- is not unique in Ontario, according to a spokesman for the Ministry of the Environment.

There are 458 of them across the province, Gary Wheeler said, supplying drinking water to people's homes in trailer parks, apartments, condominiums and townhouse developments.

In Booth's Harbour, the local water treatment facility was decommissioned in 2005 and Scott Booth connected to the nearby, publicly owned Port Rowan water system.

The private grid supplies water to Booth's marina, which is home to 245 boat houses and docks, as well as 98 mobile homes in his trailer park. It also serves 103 privately owned homes in Booth's Harbour, including Himburg's and Nichols'.

The Canadian Press has spoken to more than a dozen residents of Booth's Harbour, and all said they do not drink the water -- they buy it in bulk from stores instead.

Nichols said that if residents complain, Booth will threaten to shut off service.

"It's his go-to threat," she said in an interview last September.

Robert Kiprich, who lives a few doors down from Himburg, said he found lead in his pipes and "complained to Booth, but nothing happened."

Scott Booth did not respond to numerous detailed requests for comment provided by The Canadian Press.

Some of the issues in the community have been fixed after a series of orders issued by the Ministry of the Environment in February 2018, but many remain, according to an ensuing engineer's report commissioned by the local county.

When the ministry inspected the water system it found a litany of issues that were not in compliance with the Safe Drinking Water Act.

The legislation was enacted in response to the catastrophe in Walkerton, Ont., of 2000, where seven people died and hundreds more became sick after E. coli infected the drinking water system.

Himburg obtained the inspection report through a freedom-of-information application and shared it with The Canadian Press.

It found there were no records of the date, time, location, name of person conducting the lead test and result of the test of the water in 2017. It also found that Booth and his assistant did not have the required certification to perform microbiological tests of the system.

Booth told inspectors that data from Jan. 1, 2017 to Aug. 21, 2017, could not be found because his "laptop computer malfunctioned." The ministry also found no records of a water main break and a complaint of yellow water from a resident.

The ministry issued orders to Booth after the inspection that included immediate testing for lead, reviewing water test results within 72 hours, renewal of Booth's water operator certificate, implementing a procedure to back up data and maintaining detailed logbooks on maintenance and repairs to the distribution system.

The ministry said Booth has since complied with the orders and the water has been tested for lead at regular intervals since.

The ministry said it responded to complaints last summer about water pressure.

"The owner of Booth's Harbour indicated there are no pressure loss issues in the distribution system and explained the issues are due to the plumbing in the homes," said spokesman Lindsay Davidson.

Debbie and Ron Linington disagreed. They said they changed their plumbing during a renovation, and the same issues persist.

"Sometimes you can't get enough pressure for a shower or flush the toilet," Debbie Linington said.

The county followed up the inspection with an engineer's report to assess upgrades required to meet the ministry's licensing requirements. It found the main water pipe into the community is "too small to provide fire protection" to Booth's Harbour. It also found the water mains in the neighbourhood are too small to maintain minimum flow standards, and water pressure levels in many households remain below the ministry's standard.

The county did not inform residents of all the issues until April 2019.

One evening in September, about a dozen Booth's Harbour residents filled the small council room in the county's seat of power in Simcoe, Ont., where Himburg spoke about the area's water problems.

"When is the county going to step up?" she asked.

Mayor Kristal Chopp and councillors decided to defer a decision on the water problems until the county's lawyer could get more information about the legal obligations of everyone involved.

But eight months later and under the pall of the COVID-19 pandemic, Himburg had all but given up hope.

"Nothing's changed," she said in a recent interview. "Now with the coronavirus, I don't think any help is coming."