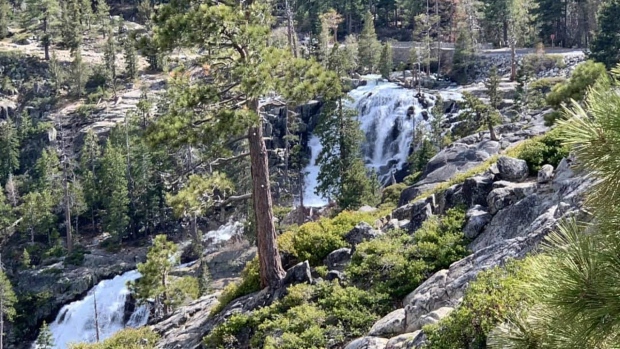 This Friday, May 31, 2019, photo released by the North Tahoe Fire Protection District shows the Eagle Falls at Emerald Bay State Park in South Lake Tahoe, Calif. Firefighters say a woman died Friday, while taking photos at a Northern California waterfall. Investigators believe she lost her footing and slipped. The district says in a statement that the tragedy "is a sad reminder to be cautious when taking selfies and other photos in dangerous areas." (Erin Holland/North Tahoe Fire Protection District via AP)

SOUTH LAKE TAHOE, Calif. -- Authorities say a woman plunged to her death down a Northern California waterfall after she slipped and lost her footing while taking photos.

The North Tahoe Fire Protection District said in a statement that the woman died Friday at Eagle Falls. The waterfall overlooking Lake Tahoe is about 150 feet (45 metres) tall.

Fire district spokeswoman Erin Holland said Saturday that witnesses reported the young woman was too close to the edge. There was no guardrail blocking access to the area.

The district says her death is “a sad reminder to be cautious when taking selfies and other photos in dangerous areas.”

The woman was not identified.