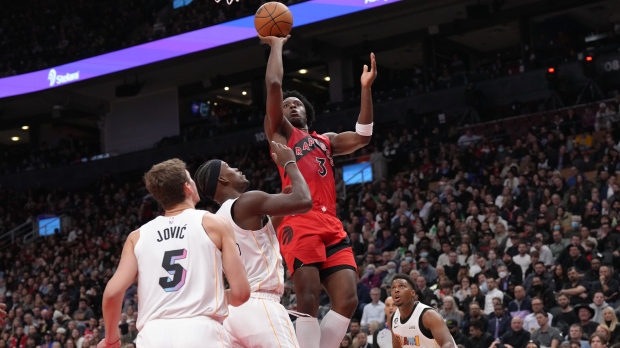 TORONTO - O.G. Anunoby had a season-high 32 points plus 10 rebounds to lead the undermanned Toronto Raptors to a 112-104 win over Kyle Lowry and the Miami Heat on Wednesday.

Fred VanVleet added 23 points and eight assists for the Raptors (9-7), who snapped Miami's three-game winning streak on the way to their fourth consecutive win at Scotiabank Arena. Scottie Barnes finished with 19 points, Chris Boucher had 15, and Thaddeus Young chipped in with 12 points and eight boards.

Max Strus led the Heat (7-8) with 20 points, while Lowry had 19 points in his second game in Toronto since he was traded to Miami in the 2021 off-season.

The Raptors have lost just once this season at home, but their win streak looked destined to end on Wednesday as they trailed Miami for the entire first half before finding another gear in the second.

VanVleet's three-pointer with 2:04 left in the third quarter was the exclamation point on a 21-0 run that put the Raptors up by 10. They led 84-79 to start the fourth quarter.

Jimmy Butler's free throws with 4:41 to play sliced the difference to just two points, but when Boucher slashed to the hoop for a dunk and then drilled a three-pointer on Toronto's next possession, the Raptors went ahead 110-102 with 1:29 to play to the delight of the Scotiabank Arena crowd.

With the Raptors' injuries mounting, the victory was another patchwork effort by Nick Nurse. Toronto's coach was asked pre-game if it's difficult to coach against Lowry since his former all-star guard knows every play in the book. But the Raptors are so short-handed, Nurse said with a half-hearted laugh that “Most of our playbook right now is in the rubbish bin because we've got so many guys who are playing different positions. We're just trying to piece it together.”

Lowry was loudly cheered during introductions and then went out and drilled a three for the game's first points. The Heat led the rest of the first half. Butler's fadeaway shot late in the first quarter put the Heat up by nine and they led 31-27 to start the second.

Anunoby had 12 points in the second quarter, including a driving layup five minutes before halftime that sliced the difference to just a point. But Miami answered with a 15-6 run to go up 10, and took a 60-54 advantage into the break.

The teams split a pair of games in Miami in late-October.

Banton earned a warm ovation when announced in the starting lineup, his first-ever start at Scotiabank Arena and second in a row after his career-high 27-point performance in Detroit on Monday. Banton, who grew up in Toronto, was the first Canadian ever drafted by the Raptors.

The Raptors are in Atlanta to play the Hawks on Saturday then return to host three in a row against Brooklyn, Dallas and Cleveland.