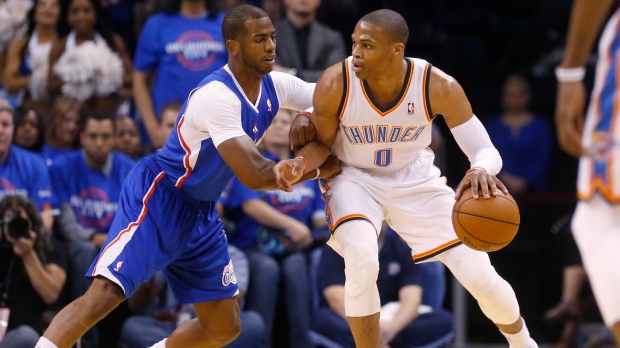 LAS VEGAS - Russell Westbrook and James Harden are together again, and Chris Paul is leaving Houston to make that reunion happen.

A person with knowledge of the situation says the Oklahoma City Thunder have traded Westbrook to the Houston Rockets for Paul in a swapping of top point guards. The Thunder also are getting first-round picks in 2024 and 2026, plus the right to swap first-rounders in two other seasons, according to the person who spoke to The Associated Press on condition of anonymity Thursday because the trade has not been announced.

Paul is a nine-time All-Star, Westbrook an eight-time selection. Paul has 9,181 career assists, the most among active players. Westbrook has 138 triple-doubles, tied with Magic Johnson for second-most in NBA history behind only Oscar Robertson's 181.

Westbrook and Harden were Thunder teammates for three seasons, the last of those in 2011-12 when that duo and Kevin Durant took Oklahoma City to the NBA Finals. They lost in five games to LeBron James, Dwyane Wade and the Miami Heat, and Harden departed that summer for Houston - where he's been an All-Star ever since.

But when the Thunder agreed last week to trade Paul George to the Los Angeles Clippers, it became clear quickly that Westbrook would be on the move as well. And this trade, when completed, will mean that Thunder general manager Sam Presti has added seven first-round picks to the team's stockpile in the last week or so.

Oklahoma City got five first-round future selections as part of the George trade. The Thunder are getting two more in this trade.

Paul and Harden were teammates for two seasons in Houston. The Rockets had a 3-2 lead over Golden State in the 2018 Western Conference finals when Paul injured a hamstring, and the Warriors rallied to win that series in seven games on the way to the NBA title. This past season, Houston was ousted in the second round by the Warriors.