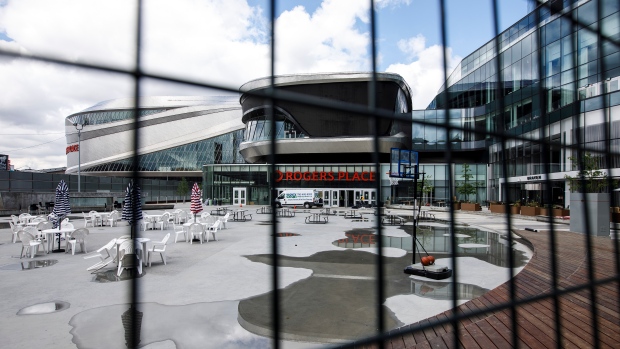 Fencing goes up around the Ice District to create a safe bubble for players, during the upcoming return of NHL hockey in Edmonton, on Thursday, July 23, 2020. THE CANADIAN PRESS/Jason Franson

In the midst of preparations for the NHL's restart of its pandemic-halted season, the league's chief content officer must have wondered what rain and flood damage at Rogers Place in Edmonton - one of two hub cities - would mean for the plan.

Local officials said at the time they believed the resumption of play, which begins Tuesday in both the Alberta capital and Toronto with a series of exhibition contests before the games start to count Aug. 1, wouldn't be hampered by the damage to the downtown arena.

Mayer confirmed Friday that, despite the scenes of water cascading into the foyer and other parts of the four-year-old downtown arena, everything is on course.

“We had a bit of a scare, for sure,” he said. “But there are no issues at all. Everything has been repaired.”

In a video released Thursday, the NHL unveiled details for its hub cities and in-game presentation as it approaches the restart. The league revealed its plan for health and safety, along with information about television broadcasts and player amenities during a period in which no fans will be allowed in the arenas.

“One of the most unique and challenging endeavours any of us have ever been involved with,” commissioner Gary Bettman said Friday. “It's not a coincidence that the hub cities are Toronto and Edmonton because of our focus on health and safety, and where COVID-19 is and isn't.”

NHL personnel will be housed and play games in bubbles separate from the general public during the pandemic under an agreement reached with the federal government.

Dr. Willem Meeuwisse, the NHL's chief medical officer, said there was extensive planning on the project, including working with the Public Health Agency of Canada, as well as provincial and local authorities.

But he added it would be wrong to presume there won't be positive tests once the 24 teams - each with have a 52-person travelling party - arrive inside the secure zone Sunday to resume a season suspended in mid-March.

“We don't expect (the bubble) to be perfect,” Meeuwisse said. “We expect with the number of people that we're going to have some positive tests, and we have a method and a process designed in advance to deal with that.”

The NHL, which reported two positive tests for COVID-19 among more than 800 players over the first five days of training camp last week, said it will use DynaLIFE Medical Labs in Edmonton and LifeLabs in Toronto for daily COVID-19 testing.

“We did not want to embark on a strategy that was going to take away protective equipment or testing from vulnerable populations and health-care workers,” Meeuwisse said. “We contracted companies ... that we were assured had excess (testing) capacity.”

The league said 30 players tested positive for COVID-19 during voluntary workouts at team facilities from June 8 to July 12, with another 13 positive results outside the official protocol.

Meeuwisse said a lot of thought has gone into what a positive test for a player or staff member inside the bubble would mean with regards to exposure and contract tracing.

“(We) landed on a strategy that's quite similar to health-care workers where you assume that there's a degree of exposure,” he said. “The one thing we cannot do with players is put masks on them when they play, but we're mitigating that risk by doing testing on a daily basis. We still will do contact tracing because there's degrees of exposure. And if we feel a degree of exposure is unusually high, they still may be quarantined. But at the end of the day, this is a protocol that has a lot of involvement and input and sign-off from the (NHL Players' Association).

“As a group, the players are comfortable with it. And I think it will continue to be the case that, if players are quite uncomfortable, they have the option not to participate.”

As for daily life inside the bubble, each has 14 restaurants for players and staff, as well as a concierge service for deliveries.

BMO Field in Toronto - normally the home of Toronto FC of the MLS and the CFL's Argonauts - is part of the bubble, serving as an outdoor recreation facility.

Four-time Grammy winner Michael Buble will perform the national anthems for the Aug. 1 opening games, while video game company EA Sports is set to provide crowd noise. The NHL plans to use individual teams' goal horns and chants to add to the atmosphere.

Mayer, who said fans will see unique camera angles because arenas will be empty, added viewers at home can also expect the league to address the pandemic and social justice movements, including Black Lives Matter, during the restart.

“We're going to open up in both hubs with a significant and a powerful opening evening,” Mayer said. “There will be moments within that where we'll honour what happened in the front line with those who worked so hard to during the pandemic, but also we will certainly look at social justice as part of this opening, and Black Lives Matter.”

Asked if there's a sense of accomplishment knowing the league is on the cusp of resuming its season, Bettman, who along with deputy commissioner Bill Daly won't initially travel to the bubbles because require a mandatory 14-day quarantine after arriving from the United States, said there's still a long way to go before he can fully exhale.

“I don't sit back and try and dislocate my shoulder trying to either pat myself or anybody else on the back,” Bettman said. “If there's any point where I'm going to feel substantial emotion, it'll be a sense of relief when I get the present the Stanley Cup.”

This report by the Canadian Press was first published July 24, 2020.