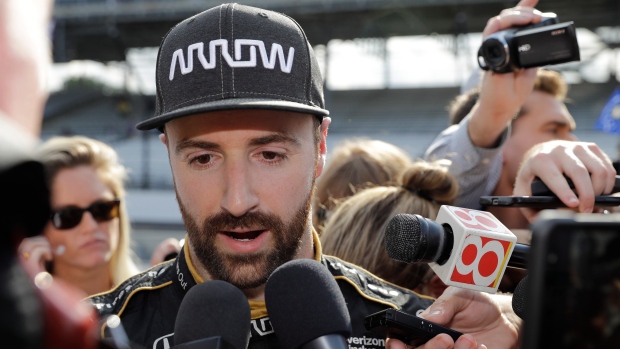 In this May 19, 2018, file photo, James Hinchcliffe, of Canada, talks with the media after failing to qualify for the Indianapolis 500 auto race, in Indianapolis. (AP Photo/Darron Cummings, File)

INDIANAPOLIS - Canadian auto racer James Hinchcliffe is expected to compete in at least two IndyCar races this season after landing a sponsor on Thursday.

The company says details on Hinchcliffe's team will be in announced in the coming weeks.

Hinchcliffe, from Oakville, Ont., lost his seat with Arrow McLaren SP Racing after the 2019 season.

McLaren came on board with Sam Schmidt and Ric Peterson's team following the season and opted to make a lineup change. Pato O'Ward and reigning Indy Lights champion Oliver Askew will drive for the team.

The 33-year-old Hinchcliffe, one of the most popular IndyCar racers last decade, has been a full-timer in the series since 2011. He has won six races.

“Hinchcliffe brings an incredible level of skill and charisma to IndyCar, not to mention his genuine empathy for other teams and drivers,” Genesys CEO Tony Bates said in a statement.