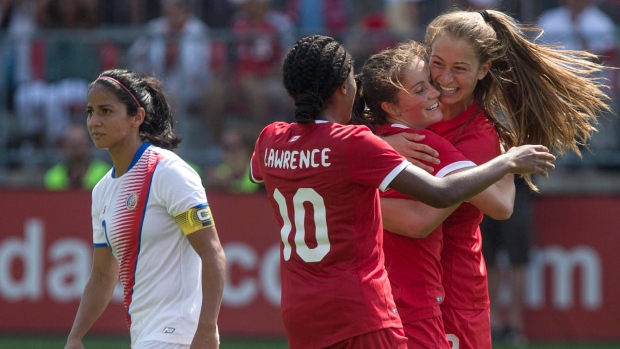 She was 15 when she made her Canadian senior debut on March 2017 and already has six goals in 19 appearances for Canada. Now the tall striker is taking her talents to France, signing a four-year deal with Paris Saint-Germain.

The French club ended months of speculation when it tweeted “Welcome, Jordyn Huitema” on Friday, nine days after her 18th birthday.

“We are delighted to have reached an agreement with Jordyn Huitema,” said Bruno Cheyrou, PSG women's sporting director, calling her a “player with great potential.”

PSG finished second in the French women's league this season and reached the quarter-finals of the Champions League.

First up for Huitema is the Women's World Cup. The fifth-ranked Canadian team host No. 26 Mexico on Saturday at Toronto's BMO Field in a farewell match before leaving for the 24-country tournament that starts June 7 in France.

Huitema, from Chilliwack, B.C., announced in January that was forgoing college to turn pro. She finished high school the same month.

“It wasn't just difficult with all the pro teams, school or pro in itself was a very difficult decision for me,” Huitema said in an interview. “School was very very important to me growing up ... That's why it was so a hard decision to go off of that path and start creating my own path and kind of paving the way for younger kids to see two options instead of one.

“So that was the whole goal - to be the first-ever female soccer player in Canada to go pro straight out of high school, just trying to pave what could be a bumpy road a little smoother for the next kid to come through and do the same thing.”

Huitema first trained with the national team at 14. She made her senior debut at 15 at the Algarve Cup in March 2017 and drew more attention three months later as a 16-year-old, scoring twice off the bench against Costa Rica.

In January 2018, she won the Golden Boot as top scorer at the CONCACAF U-20 Women's Championship in Trinidad and Tobago. In April and June, serving as captain, she helped Canada qualify for the FIFA U-17 World Cup in Uruguay, where she scored three goals in helping Canada to a fourth-place finish in December.

In 2018, she became the first player to score for Canada's under-17, under-20 and senior teams in the same year. She notched 10 goals in 16 youth international (CONCACAF and FIFA) matches in 2018 and added four more in eight games with the senior side.

Huitema has 23 goals at the international youth level, second only to Christine Sinclair's 27.

In December, she was named the CSA's Female Youth International Player of the Year.

Huitema has size and pace, turning heads in the summer of 2017 when - then 16 - she scored twice coming off the bench against Costa Rica at BMO Field.

The first goal, while a milestone, was scrappy - bouncing in off a limb after a goalmouth scramble. But the second, which came one minute later, was pure sniper as she lashed a right-footed shot into the net.

Sinclair points to Huitema's improvement since joining the national team.

“She just seemed so awkward, even just striking a ball. She hadn't fully grown into her six-foot frame yet,” said Sinclair. “For me it's just seeing her progression. From camp to camp, you just see a different soccer player, a more well-rounded soccer player, not just an athlete.

Huitema was part of a so-called Super REX Centre program that allows top female soccer prospects from across Canada to attend school, train, and play together in Burnaby, B.C., where she lived with a billet family.