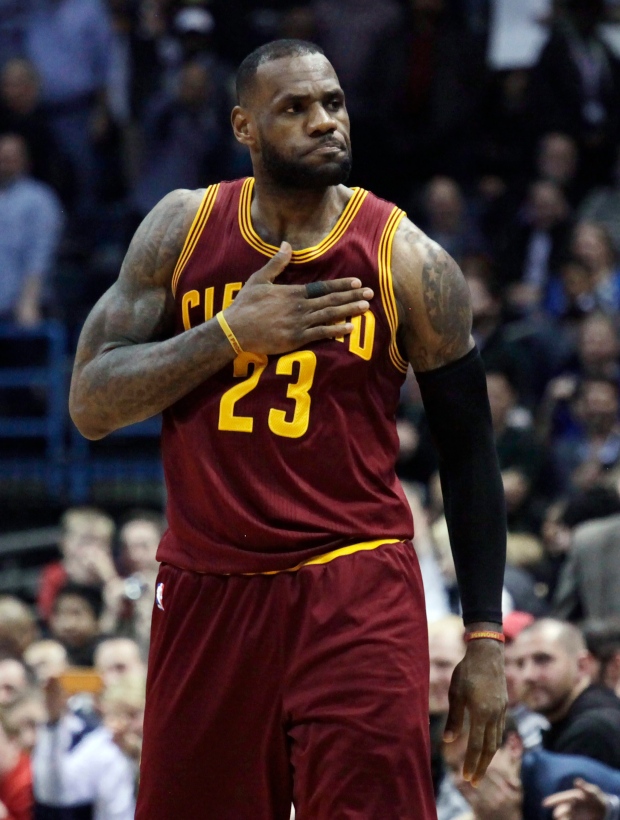 FILE - This Wednesday, April 8, 2015, file photo shows Cleveland Cavaliers forward LeBron James reacting after making a basket against the Milwaukee Bucks during the second half of an NBA basketball game in Milwaukee. For James, his homecoming season with the Cavaliers went up, down and sometimes sideways, like three seasons rolled into one. The fourth is about to begin. The only one that matters. (AP Photo/Darren Hauck, File)

LeBron James has once again gone into lockdown mode during the NBA playoffs.

For the fourth straight post-season, Cleveland's superstar is trying to shield himself from the outside world, saying he doesn't need any distractions while he and the Cavs chase a title.

"I don't have no phones, no social media, I don't have anything," James said following Tuesday's morning shootaround as the Cavs prepared to host the Boston Celtics in Game 2. "I don't care about nonsense. There's too much nonsense out there. Not during this time, this is when I lock in right now and I don't need nothing creeping into my mind that don't need to be there."

James began his personal media blackout -- he's dubbed it "Zero Dark Thirty" -- in the 2012 post-season, one year after he and the Miami Heat lost to Dallas in the NBA Finals.

The four-time MVP said he was unaware of a swipe Heat president Pat Riley seemed to take at him on Monday. Asked during a news conference about the difference in preparing to rebuild his roster this summer, Riley said there will be "no more smiling faces with hidden agendas," an apparent reference to James, who announced last July that he was going back to Ohio.

"That's not really my concern right now," James said. "My concern is Game 2, but I have no notion of what transpired yesterday."

However, once his availability with the media ended, James pulled aside a reporter to learn more about Riley's comments.

James has 20.5 million followers on Twitter, but he doesn't plan to engage with them until the playoffs end. He said the only people he needs to communicate with are his family and teammates. And as for the rest of the Cavs and their communication habits, James said he doesn't mind if they continue to be socially interactive.

"Everybody does their own thing," he said. "I'm the leader of this team and I've got to be more in tuned than anybody, that's how I approach it. It was hard early on, but I've been doing it for a few years now. It is very tough to just be away from everything. It's just a challenge. I love challenges."

Cavs forward Kevin Love said he won't shut down quite like James.

"I'm not going to turn off my phone," Love said. "But social media, no. I won't be throwing up any of my chocolate milk ads for a couple months."