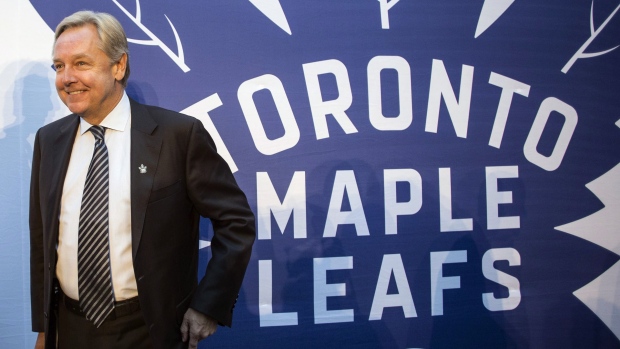 A memo to MLSE employees from president and CEO Michael Friisdahl obtained by The Canadian Press outlines the voluntary pay reductions as well as other steps to help mitigate pandemic-related losses.

“The halt in operations is having a dramatic impact on our business,” Friisdahl wrote. “Not surprisingly, the sudden halt of all games and events on March 11th has had a significant impact to our revenue. At the same time many of our costs continue, which clearly puts financial pressure on our business.

“The situation is further compounded by the uncertainty and indefinite postponement of our operations.”

Friisdahl said, effective Wednesday, MLSE's executive leadership team is taking a temporary salary reduction of 20 to 25 per cent. Given MLSE has also opted not to pay out annual bonuses to full-time employees, the reduction in pay for the leadership group will be close to 50 per cent.

The numbers are higher for Friisdahl, who is taking a 30 per cent cut. In the absence of bonuses and incentives, his total annual compensation will be reduced by 55 per cent.

They do not cover the presidents and GMs of the Raptors, Maple Leafs, Toronto FC and Argonauts, who have committed “similar support” through the Team Toronto Fund, according to a source not authorized to speak on the subject.

The company, which has some 750 full-time employees and 4,000 hourly and part-time workers, had already announced several pandemic-related initiatives.

In the wake of leagues suspending play, MLSE announced help for hourly employees in the form of a payment to top up their Employment Insurance benefits to 95 per cent of their regular average earnings through the regular season, which at the time was for some four weeks.

MLSE's team presidents subsequently joined forces with the Blue Jays to form the Team Toronto Fund, having their club management, coaches and players provide additional assistance - including a special hardship fund where all impacted employees can apply for further assistance.

“Over the coming weeks, we will continue to evaluate the impact and I will update you as any new or further actions are required to respond to this very fluid situation,” Friisdahl said.

The Associated Press reported last week that top NBA executives are having their base salaries reduced by 20 per cent for the foreseeable future. The reductions affect roughly the league's 100 highest-earning executives both inside the league headquarters in New York and in global offices.

NASCAR is also cutting salaries until the series returns to racing, according to The AP. Series executives, including the presidents of NASCAR-owned tracks, are taking a 25 per cent reduction in salary, while all other employees are having their salary reduced by 20 per cent. Budget expenses and capital improvements have also been frozen.

The NHL is reportedly cutting salaries for league employees who make more than US$75,000 by 25 per cent.