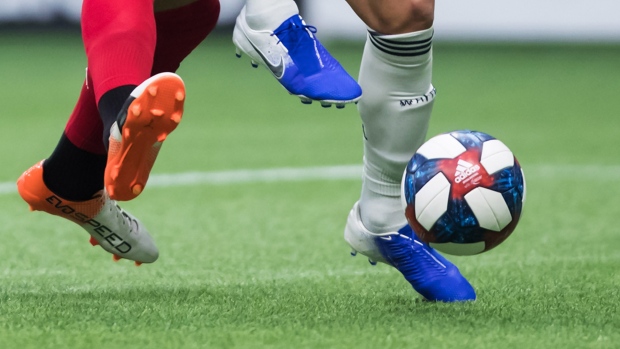 Toronto FC's Terrence Boyd, left, and Vancouver Whitecaps' Scott Sutter vie for the ball during the second half of an MLS soccer game in Vancouver on Friday May 31, 2019. Major League Soccer has cancelled its 2020 all-star game as well as the Leagues Cup and Campeones Cup. THE CANADIAN PRESS/Darryl Dyck

TORONTO -- Major League Soccer has cancelled its 2020 all-star game as well as the Leagues Cup and Campeones Cup.

The all-star game, pitting MLS all-stars against their Mexican league counterparts, was scheduled for July 29 at the Banc of California Stadium in Los Angeles.

The second edition of the Leagues Cup, a tournament featuring MLS and Liga MX teams, was slated to run between July and September. The third edition of the Campeones Cup was scheduled for Aug. 12 in Seattle between the MLS champion Sounders and Mexican league winner.

ML said the games were cancelled "to provide the most available dates for the remainder of the year for league competition."

The league said all three marquee events will return in 2021.

MLS suspended play on March 12, two weeks into the 2020 season, due to the global pandemic. Teams have begun individual voluntary outdoor workouts at their training facilities amidst reports the league is looking to play games out of a central hub, possibly in the Orlando area, later in the summer.

The league said the 2021 MLS all-star game will take place in Los Angeles at the same venue with "every expectation" that MLS and Liga MX all-stars will face off.

MLS also said it was reviewing proposals from three cities to host the 2022 all-star game.

This report by The Canadian Press was first published May 19, 2020.