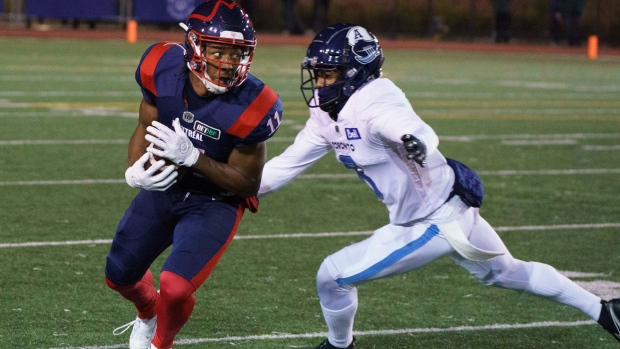 MONTREAL - The Alouettes scored three touchdowns in the second quarter, then held on to beat The Toronto Argonauts 37-16 in Montreal on Friday night.

Running back William Stanback added a third Montreal TD and rushed for 203 yards, while David Cote made three field goals.

The Alouettes woke up from a quiet start in the second quarter. Monshadrik Hunter became the first ever Alouette to intercept Bethel-Thompson and Shiltz made Toronto pay on the very next play with a 33 yard bomb to Lewis for the first TD of the night.

Lewis notched his second TD of the night on an even bigger play when Shiltz found him wide open for a 58 yard play.

Stanback made a one-yard rush on third and goal to give Montreal a 21-10 lead heading into halftime.

Pipkin scored the only second half points for Toronto, filling in for Bethel-Thompson. The former Alouette rushed for eight yards giving Toronto a 10-7 lead.

After missing his first field goal attempt and hitting the upright on his second, Cote made good the third time around, hitting a 43-yard attempt to give Montreal a 24-10 lead in the third quarter.

Stanback exploded with a 65 yard run in the final moments of the third, his longest rush of the season, and Cote added a second field goal to put the Als ahead 27-10 early in the fourth.

With 6:20 left on the game clock, Pipkin rushed on third down for his second touchdown. The Argos opted for a two-point conversion but Chris Ackie intercepted Bethel-Thompson, keeping the score at 28-16.

Najee Murray intercepted Bethel-Thompson a fourth time with just seconds left in the game, returning the ball 64 yards for a touchdown. The pick-six sealed the Als' 145th home win since the franchise's return to Montreal in 1996.