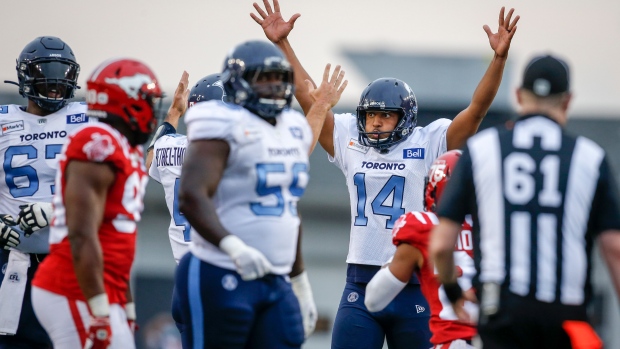 Boris Bede has no axe to grind with the Montreal Alouettes.

Bede spent five seasons in Montreal (2015-19) before being traded to Toronto in February 2020 for fellow kicker Tyler Crapigna. Bede faces his former team for the first time Friday night when the Argos (3-3) host the Alouettes (2-3).

“I don't have anything to prove to another team,” Bede said during a video conference. “Obviously it's exciting, you're going against an old team but time goes by, I'm on a new team now.

“It's different, it has kind of a little excitement to it, to be honest . . . but I take it as a normal day, it's going to be a normal game.”

“I've always made any field I've been on, that it's my field,” Bede said. “Obviously when you go back to your old stomping grounds, that might be different.”

Friday's contest begins an important stretch for both teams. Montreal's next five games are against East Division rivals while Toronto faces conference competition over its next four.

“Obviously you want to be at the top of the East so this is where there's more excitement, really,” Bede said. “It's cool to play against your old teammates but really, you're playing to get the No. 1 spot so that's where it gets real.”

Canadian linebackers Henoc Muamba (hamstring) and Cameron Judge (ankle) are also both out.

While quarterback Vernon Adams Jr. has completed just 54.2 per cent of his passes, he has over twice as many TD strikes (nine) to interceptions (four). He has also rushed for 201 yards on 34 carries (5.9-yard average).

“We've got to stop that, first and foremost,” Argos head coach Ryan Dinwiddie said of Montreal's rushing game. “We know that's kind of what gets them going.”

But Toronto can't afford to forget about Adams either.

“He's a playmaker,” Dinwiddie said. “When he gets out on the edge, that's when they're at their best.

“He's throwing jump-balls and 50-50 balls and they've been coming down with many of them. That's kind of our concern there, don't let him out of the pocket.”

“Chris has his schemes where he knows how to attack certain things and put our defence in a good position to stop the run and be successful on the field,” Dinwiddie said. “He's got his plan, now we've got to go out and execute it.”

Both teams come in on losing notes. Toronto dropped a 30-16 decision in Regina last week while Montreal lost 27-18 to B.C.

Saskatchewan had 182 rushing yards against Toronto, with William Powell registering 122 yards on 21 carries (5.9-yard average). Despite that, the Argos' defence is ranked second overall against the run (85 yards per game).

It's certainly a worn-out cliche, but in football a defence's first priority is always to stop the run. Shawn Oakman, Toronto's towering six-foot-nine, 287-pound defensive lineman, said that means getting to Stanback, or any ball-carrier, as quickly as possible.

“You want tackles for a loss,” he said. “You don't want the running back to be gaining three, four yards because three and four yards turns into 60 and 70 yards.

Another challenge will be getting to Adams. Toronto has registered 12 sacks -- leaving it tied for fourth in the CFL -- with Oakman having a team-leading three.

“I know we're going to try our best to get to him and get him on the ground,” said Oakman.

This report by The Canadian Press was first published Sept. 23, 2021.