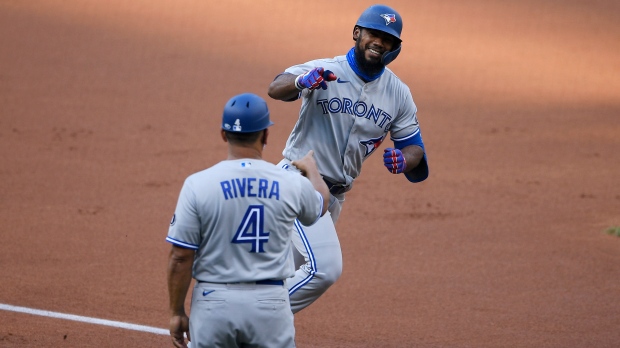 WASHINGTON - Because of injuries, the can't-play-in-Toronto Blue Jays were without their leadoff hitter and their closer against the Washington Nationals on Monday night.

The two guys who took over those jobs came through. Teoscar Hernandez replaced late scratch Bo Bichette and hit two of Toronto's four solo homers off Anibal Sanchez, Anthony Bass got the save while filling in for Ken Giles, and the Blue Jays beat the 2019 World Series champions 4-1.

Hernandez drove the game's second pitch over the wall in right-centre, and started the fifth by homering to the same part of the park.

“Teo got us going right off the bat. ... Bass came in and was lights out. Shut the door. That's what everyone knows he's capable of doing. That was definitely a positive sign,” said Toronto's Trent Thornton, who started and pitched four innings, before being followed by five relievers.

“Two guys stepped up and got the job done,” Thornton said. “We have plenty of guys who are fully capable of doing that.”

Rowdy Tellez and Danny Jansen also went deep for the Blue Jays, who put Giles on the 10-day injured list Monday and pulled Bichette from the lineup about 15 minutes before the first pitch with a tight left hamstring.

Manager Charlie Montoyo's team already had to deal with the inconvenience of not being allowed to host any 2020 games in Toronto. Indeed, the Blue Jays' first two “home” games of this pandemic-altered season will be played in Washington on Wednesday and Thursday while they wait for Buffalo's minor league park to be prepped for them.

Toronto improved to 2-2 and dropped the World Series champions to 1-3 by going deep - over and over again.

Washington kept getting hits, 11 in all. But other than Kurt Suzuki's double that scored Eric Thames from first base in the fourth, the Nationals could not come through.

“Just one of those days we weren't lucky,” said manager Dave Martinez, who was critical of baserunning by Victor Robles and Thames.

The Nationals hit into four double plays. Three times, they stranded a man on third. They left a total of 10 runners on base.

Ryan Borucki (1-0) got four outs to earn the win, before Bass recorded his first save of the year.

Toronto, meanwhile, kept getting the big swings: Of the six hits given up by Sanchez (0-1), four left the yard - including Hernandez's seventh career multi-homer game - and the others were doubles.

Asked about not allowing a single, Sanchez smiled widely and joked: “Almost a no-hitter.”

The temperature was 94 degrees at the start, and the humidity didn't help matters. “I don't know if you could see my jersey,” Thornton said about how much he was sweating, “but it felt like it was about 60 pounds.”

Martinez got a bit choked up speaking about the COVID-19 outbreak among the Miami Marlins. The 55-year-old manager was hospitalized last September for a heart procedure. “I'm going to be honest with you: I'm scared. I really am,” Martinez said. “So I go from (Nationals Park), home, back here every day. That's all I do. I wash my hands - I went from 47 times a day to probably 99 times a day. Wear my mask everywhere I go. There's that concern. Right now, you don't know, because of my heart condition, what happens to me if I do get it.”

Utility player Josh Harrison signed a one-year contract with the Nationals and was on the 30-man roster for Monday's game. He can play the infield or outfield.

Blue Jays: Giles has a strained right forearm. ... Montoyo said Bichette's hamstring tightened up when he was taking grounders. ... OF Randal Grichuk is day to day with back tightness. ... Toronto activated RHP Wilmer Font from the IL, recalled Borucki from the taxi squad, added OF Billy McKinney to the taxi squad and placed INF Travis Shaw on family medical leave.

Nationals: OF Juan Soto passed one test for the coronavirus; a second negative result is needed before a player can return to the club. Soto went on the COVID-19 IL on opening day. ... Martinez said World Series MVP Stephen Strasburg did some light throwing and felt “less tingling in his thumb, so that's good news.” Strasburg missed his first start because of a nerve issue in his pitching hand.

Former Nationals pitcher Tanner Roark returns as a visiting player for the first time, starting for Toronto on Tuesday. “I know the mound like the back of my hand,” the right-hander said. “I'll be ready to go.” He will go up against RHP Austin Voth. Roark played his first six big league seasons for the Nationals before getting traded in December 2018; he was with Cincinnati and Oakland last season.