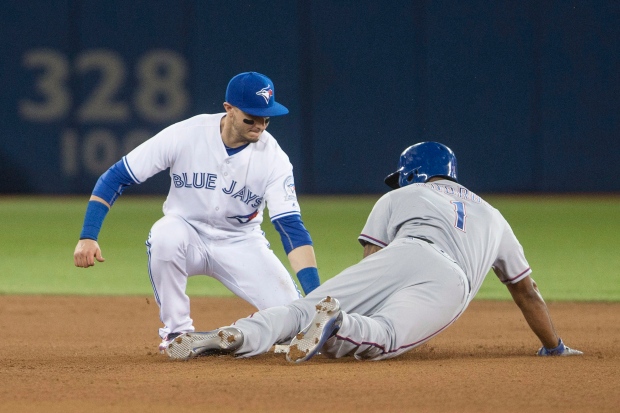 TORONTO -- Justin Smoak tied the game in the ninth, then hit a walk-off homer in the 10th inning to lift the Toronto Blue Jays to a 3-1 victory over the Texas Rangers on Tuesday.

Smoak sent the first pitch he saw off Rangers reliever Phil Klein in the 10th over the left-field wall. Edwin Encarnacion led off the 10th with a single.

The Toronto offence, struggling of late, kicked into gear in the bottom of the ninth with a solo homer from Smoak off Texas closer Shawn Tolleson to tie the game. Kevin Pillar then laced a double into left field, Ezequiel Carrera and Josh Donaldson walked but Bautista lined out to end the inning.

Reliever Joe Biagini (1-1) picked up the win for the Blue Jays (13-15) on a night where starter Marco Estrada's only mistake was his second pitch of the game.

Estrada, who allowed just two hits through six solid innings, gave up a lead-off homer to Rougned Odor on his second pitch -- an 88 mile-per-hour fastball that the Rangers second baseman sent over the right-field fence.

Estrada also struck out three and walked one batter in the no-decision.

Toronto squandered a number of opportunities to tie the game. Troy Tulowitzki hit a deep fly ball to centre field for the third out of the first inning, stranding runners on the corners. Then Donaldson struck out to end the fifth, leaving runners on second and third.

The Blue Jays also caught an unlucky break in the fifth inning when an errant pitch from Perez hit the back stop and bounced right back to catcher Brett Nicholas. Russell Martin, who was at third base, had to hold his ground.

Toronto wasted another opportunity in the seventh inning when Texas reliever Jake Diekman hit Pillar with a pitch and walked Martin to put runners on first and second with nobody out.

But Diekman bounced back to stike out Darwin Barney after a tough 15-pitch at-bat, then got Saunders swinging for the second out. Donaldson lined out to left field off Tony Barnette to end the inning.

Notes: The Blue Jays continue their four-game series against Texas on Wednesday with the final game on Thursday night. Right-hander Aaron Sanchez (2-1, 2.59 earned-run average) will start for Toronto on Wednesday while righty Colby Lewis (2-0, 3.19) will counter for the Rangers. Thursday's pitching matchup sees left-hander J.A. Happ (3-0, 2.76) against lefty Derek Holland (3-1, 2.48).