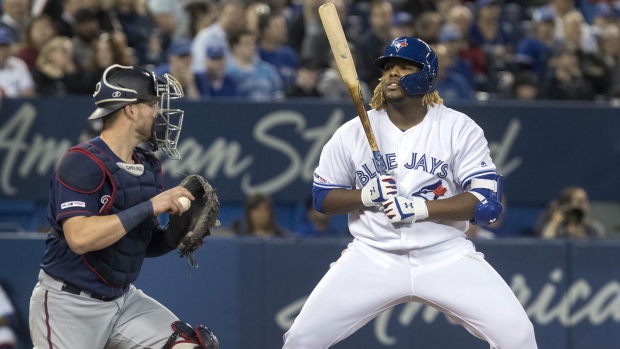 TORONTO -- Mitch Garver homered to back a solid start from Jose Berrios and the Minnesota Twins blanked Toronto 3-0 on Tuesday to hand the reeling Blue Jays their fourth straight loss.

Marwin Gonzalez earned an RBI on a walk for the Twins (22-12), who have won eight of their last 11 games.

Berrios (6-1) lowered his earned-run average from 2.91 to 2.53 with seven shutout innings. He allowed just four hits and struck out five.

Toronto (15-21) lost for the seventh time in eight games, including back-to-back shutouts by the Twins to open a six-game homestand.

The game began poorly for Sanchez, who walked Gonzalez with the bases loaded to give Minnesota a 1-0 lead in the first inning. Sanchez needed 31 pitches to get out the frame, allowing a pair of hits and two walks.

The 26-year-old right-hander seemed to settle in after the troublesome opening inning, giving up only three more hits until Garver launched a two-run homer off him to put the Twins up 3-0 in the sixth. The home run was Garver's seventh of the season.

Sanchez had called out his Blue Jays teammates -- specifically their defensive sloppiness -- after his last start on May 2 in Anaheim. Toronto manager Charlie Montoyo said before Tuesday's game that Sanchez's comments were said in the heat of the moment and the team had moved past it.

The Blue Jays held a hitters meeting before the game, which usually only happens prior to the first game of a series, but it seemed to do little to spark their stagnant offence. Toronto had six hits and managed just one extra-base hit -- a double from Billy McKinney in the seventh.

Top prospect Vladimir Guerrero Jr. snapped a three-game hitless streak with a single in the ninth.

Minnesota entered Tuesday with the second-best win percentage in the majors at .636, behind only the Tampa Bay Rays.