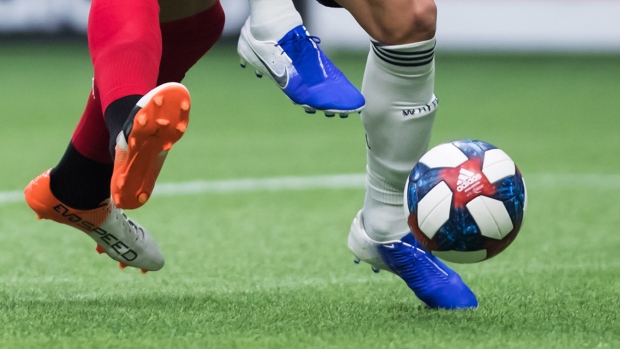 Toronto FC pushed back its departure to Florida for the MLS is Back Tournament to Saturday, saying more time was needed to complete pre-travel COVID-19 testing. Toronto FC's Terrence Boyd, left, and Vancouver Whitecaps' Scott Sutter vie for the ball during the second half of an MLS soccer game in Vancouver on Friday May 31, 2019. THE CANADIAN PRESS/Darryl Dyck

Toronto FC pushed back its departure to Florida for the MLS is Back Tournament to Saturday, saying more time was needed to complete pre-travel COVID-19 testing.

The MLS team had been scheduled to leave by charter Friday. Toronto opens the World Cup-style tournament on July 10 against D.C. United.

The New York Red Bulls also delayed their Friday departure, saying a staff member had produced an inconclusive COVID-19 test result. It said all other staff and players had tested negative on Thursday.

The Red Bulls said they would reschedule their flight once all the test results were confirmed.

Toronto did not immediately respond to a request for more information about its test result issue.

While some teams are having issues getting to Florida, establishing a secure MLS bubble there has also proved challenging.

Six players from FC Dallas and one from Columbus Crew SC have already tested positive in the Sunshine State. They have been isolated and are receiving care while the other members of their delegations are in quarantine pending more testing.

Major League Soccer had required teams to arrive in Florida no later than a week before their first game at the tournament, which runs July 8 to Aug. 11 at Disney's Wide World of Sport Complex in the Orlando area. But issues with test results have caused several delays.

Nashville SC delayed its Florida flight until Friday due to delays in getting results of its pre-travel screening tests.

The club said subsequent test results were confirmed to be negative. Still the Whitecaps postponed their flight to permit additional testing.

Toronto was forced to call off training Wednesday after problems getting test results in time.

FC Dallas made it to Florida last Saturday, only to have two players test positive upon their arrival at the league's host hotel. Four other players tested positive soon after.

All six were assessed and moved to the isolation area of the hotel where they continue to receive “remote care from a health-care provider,” the league said.

Coincidentally, Vancouver and Dallas meet Thursday in the first match at the tournament for both.

On Thursday, Columbus confirmed that one of its players had tested positive in Florida.

The Montreal Impact arrived Thursday. They open next Thursday against the New England Revolution.

While all 25 teams are staying in the same hotel, they are not supposed to have contact with each other.

League protocols include regular screening, testing, social distancing, personal protective equipment and a mandatory quarantine for all individuals upon arrival at the hotel until they have a negative test.

MLS has been on hiatus since March 12 when play was suspended two weeks into its season.