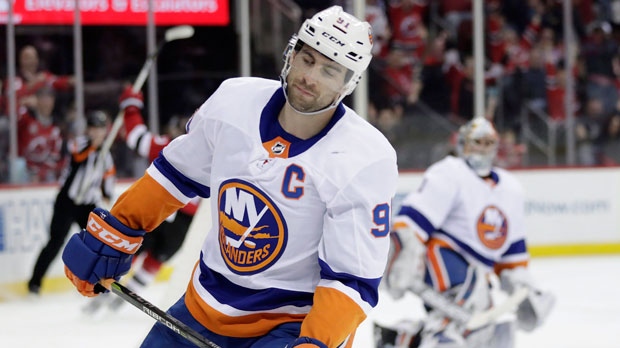 At the same time, it was hard for the Toronto Maple Leafs winger -- and the rest of the hockey world, for that matter -- to ignore the coverage of the team's brain trust strolling into a Los Angeles office Monday to offer their pitch to the pending free agent centre and his representatives.

Speaking at a promotional event Tuesday, Brown was well aware of the chatter after Toronto president Brendan Shanahan, GM Kyle Dubas and coach Mike Babcock made a presentation to the Tavares camp ahead of free agency opening July 1, but added the current Leafs don't want to get ahead of themselves.

"There's so many things being said, especially around this time of year," Brown told reporters. "You just wait until it all unfolds.

"Whoever we've got in the room come September, we've got to be ready to go."

The New York Islanders, who drafted Tavares first overall in 2009 and are bidding to keep the superstar's services, also reportedly spoke with the 27-year-old in person Monday, with four other teams expected to meet with him this week.

"He's one of the elite players in the league," Brown added. "Any team would be lucky to have him."

The Leafs have improved dramatically since finishing last in 2015-16 as part of a full rebuild, securing a playoff spot the last two seasons thanks in part to young guns Auston Matthews, Mitch Marner and William Nylander.

But getting a big-ticket free agent No. 1 centre in his prime -- one with the fifth-most goals in the NHL since he entered the league, and a native of nearby Mississauga, Ont. -- would be a nothing short of an earth-shaking coup.

"(Tavares is) from this area and he knows what it means to be a Leaf," said Toronto centre Dominic Moore, who is from just north of the city in Thornhill. "He's a New York Islander at the moment, and he's a proud one I'm sure.

"Depending on what he decides, he'll have great opportunities one way or the other."

Brown said the fact the Leafs were able to sign then-37-year-old Patrick Marleau to a contract worth US$18.75 million over three seasons last summer shows Toronto has become a destination for high-profile free agents.

"We've put the blue prints in here and we really believe in what we're doing," said Brown, 24. "We think we're close to doing something special.

"Last year didn't end the way we wanted, but (we have) a lot of good building blocks. We're going into next season with a good feeling."

Moore, who along with Brown and fellow teammate James van Riemsdyk, was promoting his charity ping pong tournament Smashfest that raises money for concussion and rare cancer research with support of the NHL Players' Association, added that playing in your hometown isn't for every player.

"There are certain personalities, whether you're from this area or not, maybe you don't relish that as much as some other guys who would rather play in a smaller market," said Moore, who will turn 38 in August and is without a contract for 2018-19. "That's more of a personality thing, but at the end of the day it's hockey, it's the NHL, it's a very special thing to be on any team in the league."

Van Riemsdyk, meanwhile, took part in ping pong games with fans and passersby at Tuesday's event to push Smashfest on Aug. 1 in Toronto, but declined to speak with the media.

The 29-year-old scored a career-high 36 goals in 2017-18 and has spent the last five seasons with the Leafs, but looks set for a big payday on July, more than likely with a team other than Toronto.

"Wherever he lands, it's going to be good for that team," Brown said. "He's done so much for this city. He's come to play every game. He takes care of his body and he takes care of his game. On and off the ice he gives the team everything he has.

"I've learned a lot playing with a guy like that. I've love to play with him more, but it's the business and he's earned it."