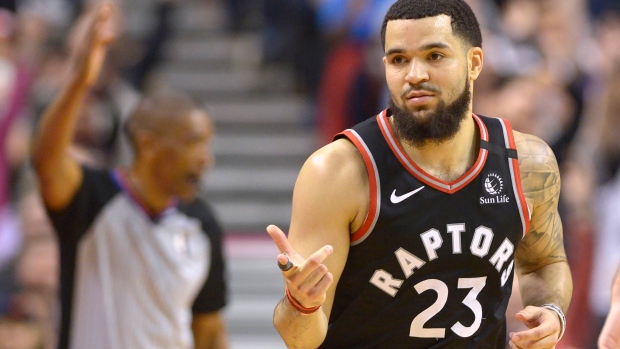 Toronto Raptors guard Fred VanVleet (23) reacts after hitting a three-pointer during second half NBA basketball action against the Philadelphia 76ers in Toronto on Wednesday, January 22, 2020. THE CANADIAN PRESS/Nathan Denette

TORONTO - Fred VanVleet scored 22 points while Marc Gasol had 17 points on a perfect shooting night, and the Toronto Raptors beat the Philadelphia 76ers 107-95 on Wednesday for their fifth consecutive win.

Six Raptors scored in double figures. Pascal Siakam had 18 points and 15 rebounds, while Norman Powell chipped in with 18 points. Kyle Lowry and Serge Ibaka finished 16 each for Toronto (30-14), which ended the Sixers' four-game win streak.

Tobias Harris had 22 points to top the Sixers (29-17), who were missing all-star Joel Embiid.

Playing his fifth game back since missing 12 with a hamstring injury, Gasol shot 7-for-7 from the field, and connected on his three three-point attempts.

The Sixers led by as many as 14 points early in the game and were up by double digits in the third quarter before the Raptors gained any real ground on their Eastern Conference rival.

When Rondae Hollis-Jefferson chucked a rugby pass to VanVleet as he was falling sideways, VanVleet's three-pointer gave Toronto a two-point lead. Lowry's driving layup on Toronto's next possession capped a 20-6 Raptors run and sent Toronto into the fourth quarter up 76-72.

Midway through the fourth, Ibaka stole the ball off Ben Simmons and his two-handed slam put a punctuation mark on the play and had Hollis-Jefferson raising his arms gesturing for the Scotiabank Arena fans to cheer. They obliged.

Powell's layup on Toronto's next possession made it a nine-point Raptors lead. Back-to-back Sixers baskets briefly sliced the gap to three, but consecutive VanVleet three-pointers capped a 10-0 Raptors run to put Toronto up by 13 - their biggest lead of the game - with 1:29 to play. A Siakam dunk with 24 seconds left clinched Toronto's victory.

Embiid, who suffered a nasty finger dislocation earlier this month, underwent surgery to repair a torn ligament. The Raptors held the Sixers big man scoreless for the first time in his NBA career the previous time Philly travelled to Toronto, on Nov. 25.

The Raptors then lost in Philadelphia two weeks later.

While Toronto has won 15 consecutive home games against Philly, a rivalry is developing between the two squads who are battling it out near the top of the Eastern Conference. Kawhi Leonard's famous four-bounce buzzer-beating winner in Game 7 of the conference semis fuelled it like a blowtorch. ESPN made the trip north to broadcast the game nationally in the U.S.

The Raptors lost Patrick McCaw to a facial contusion early in the second quarter, when Norvel Pelle smacked him hard in the face when the two were battling for a loose ball. McCaw's teammates motioned immediately for the medical staff. Clutching a towel to his face, he was helped him to the locker room.

The Sixers connected on seven threes - several of them wide open - in the first quarter, and Mike Scott's long bomb gave the visitors a 14-points lead late in the frame. Philadelphia led 35-26 to start the second.

The Raptors chipped away at the deficit in the second, taking their first lead on Lowry's reverse layup with 1:33 to play in the first half. The teams went into the break knotted at 50-50.

The Raptors are in New York to face the Knicks on Friday, then battle the Spurs in San Antonio on Sunday.