TTC subway service to be disrupted on Spadina line

Transit riders are facing another weekend of service disruptions along the Spadina subway line.

For the second consecutive weekend, there will be no subway service between St. George and St. Clair West stations on Sunday until 2 p.m., the TTC says.

The line is closing so crews can work on the tracks.

Trains will be running as scheduled on the Spadina subway line Saturday and there will be no impact on the Bloor-Danforth subway line. 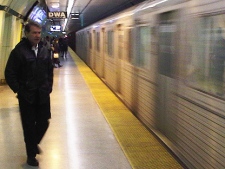 People wait to board a TTC subway train in this file photo. (CP24/Ken Enlow)