A 37-year-old man is wanted for first-degree murder in a fatal shooting at a Scarborough sports bar earlier this week, Toronto police say.

Detectives obtained an arrest warrant Thursday for Nicholas Walker, who is of no fixed address, police say.

Walker is black, six feet tall, 180 pounds, has short black hair and is known by the nickname "Nipsy."

Detectives aren't releasing a photo of Walker because doing so would "jeopardize" the ongoing investigation, according to a police statement.

In a rare move, police are asking the public and the media not to publish any photos of Walker because, police say, it would have a negative impact on the investigation.

Meanwhile, police have uploaded a 90-second video to YouTube to appeal for tips to locate Walker. In the video, Toronto police Insp. Edward Boyd asks Walker to contact a lawyer and make arrangements to surrender to investigators. 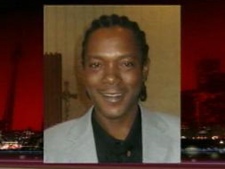