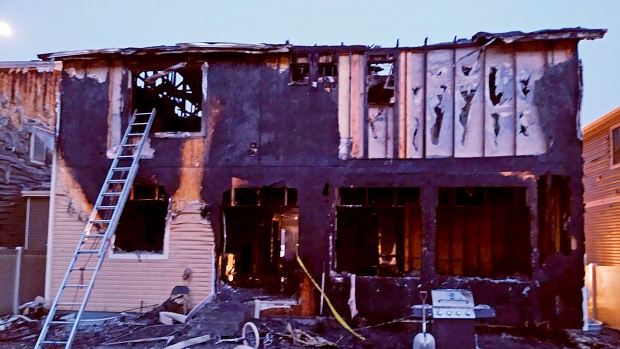 DENVER - Five people were found dead Wednesday after an early morning fire destroyed a suburban Denver home - a blaze that authorities said they suspect was intentionally set. Three people escaped the fire by jumping from the home's second floor.

Investigators believe the victims were a toddler, an older child and three adults, said Denver Fire Department Capt. Greg Pixley. Their bodies were discovered after firefighters extinguished the fire, which was first reported by a Denver police officer at 2:40 a.m., Pixley said.

Police are investigating the fire along with firefighters because there are indications that it was arson, said Joe Montoya, division chief of investigations for Denver police. He would not elaborate on the evidence because he said he did not want to compromise the investigation.

Several personnel with the U.S. Bureau of Alcohol, Tobacco, Firearms and Explosives arrived at the home about mid-day. Telephone calls to the agency's Denver office for comment went unanswered. The ATF frequently assists agencies in arson investigations.

Abou Djibril, who said he was a relative of the victims, told The Denver Post the people who died were members of a family that had immigrated from Senegal. Another friend, Ousmane Ndiaye, told the newspaper that the father was an engineer with Kiewit, a construction and engineering firm. An email sent to Kiewit for comment wasn't immediately returned.

Neighbour Maria Mendoza said she was awakened by noise and someone screaming, “Get the baby out! Get the baby out!” at 2:40 a.m. She ran to a window and saw flames and plumes of smoke rising from the home just down the street.

“I awoke my husband and he ran outside to see if he could help but there was nothing he could do. The fire was too big,” Mendoza said. Firefighters arrived moments later.

“It all happened so fast, less than 10 minutes. These are big houses but they're all made of wood,” Mendoza said, holding back tears. “May God and the community help this family.”

Mendoza said she didn't know the family but would wave or say “Hi” whenever she saw the children. She said the neighbourhood was built about two years ago.