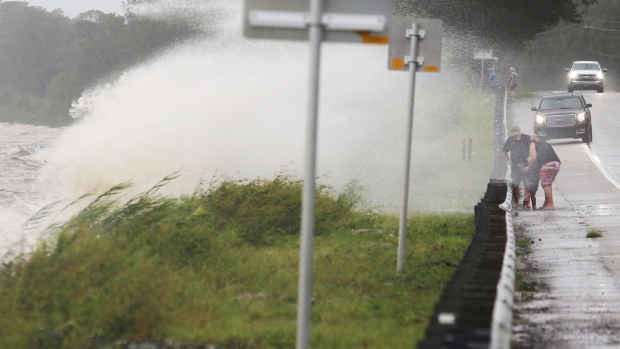 PENSACOLA, Fla. - The mayor of a coastal Alabama city says one person is dead and one is missing as a result of Hurricane Sally.

Sally lumbered ashore near the Florida-Alabama line with 105 mph winds and rain measured in feet, not inches.

Now a tropical storm, Sally was swirling north of the Florida Panhandle with winds of up to 45 mph Wednesday night, and was spreading heavy rain into eastern Alabama and western Georgia.

More than 540,000 homes and businesses are without electricity in south Alabama and the Florida Panhandle.

Cars and a motorcycle are underwater as water floods a street, Wednesday, Sept. 16, 2020, in Pensacola, Fla. Hurricane Sally made landfall Wednesday near Gulf Shores, Alabama, as a Category 2 storm, pushing a surge of ocean water onto the coast and dumping torrential rain that forecasters said would cause dangerous flooding from the Florida Panhandle to Mississippi and well inland in the days ahead.(AP Photo/Gerald Herbert)