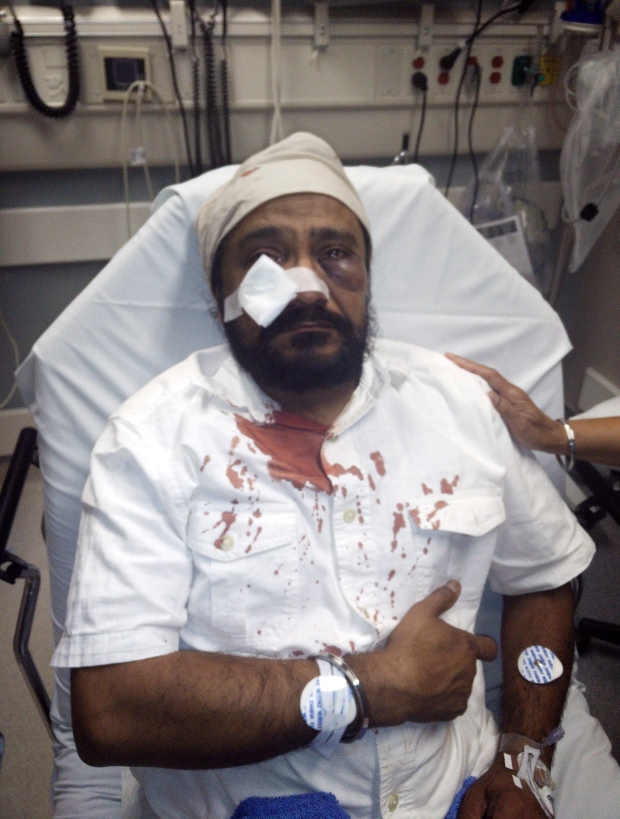 In this Sept. 8, 2015 photo provided by The Sikh Coaliton, 53-year-old Inderjit Mukker is seen at a hospital in Hinsdale, Ill., following an attack authorities say was a road rage incident in Darien, Ill. On Tuesday, Sept. 15, prosecutors said a suburban Chicago teenager who had already been charged with punching the Sikh man has now been charged with a hate crime. (The Sikh Coalition via AP)

WHEATON, Ill. -- A suburban Chicago teenager already charged with punching a Sikh man during what authorities describe as a road rage incident has been charged with a hate crime, prosecutors said Tuesday.

Further investigation into the incident on Sept. 8 revealed that the teen yelled racial slurs from his vehicle at 53-year-old Inderjit Mukker, the State's Attorney's Office said in a news release.

After the two pulled over, Mukker stayed sitting in his vehicle but the 17-year-old approached and punched him in the face, prosecutors say.

"Crimes based on hatred or prejudices have no place in our society," State's Attorney Robert B. Berlin said in a statement. "Any physical attack motivated in whole or in part by an offender's pre-conceived bias against another individual based on race, religion, disability, ethnic origin or sexual orientation is a crime not only against the victim but against society as a whole."

It is unusual for minors to be charged with hate crimes and this might be only the second such case in nine years in DuPage County, State's Attorney's Office spokesman Paul Darrah said.

The additional charge follows calls from a faith group called the Sikh Coalition for prosecutors to charge the teen with a hate crime after Mukker, a resident of Darien, told the group that his attacker yelled at him, calling him a terrorist. The group said they met with prosecutors Monday and "shared additional evidence and information," according to a Sikh Coalition news release.

"For the Sikh American community, a formal hate crime charge was never about a harsher penalty, but instead prosecuting the crime for what it was," Sikh Coalition legal director Harsimran Kaur said.

Mukker agreed, saying at a Tuesday rally that he had no doubt about his attacker's motivation.

"This was a hate crime," he said. "I was attacked because of the colour of my skin and my articles of faith."

The charge comes after the teen was charged as a juvenile with five counts of felony aggravated battery -- four for allegedly attacking Mukker and one after he allegedly punched a police officer in the face when officers went to his home to arrest him.

It is unusual for minors to be charged with hate crimes and this might be only the second such case in nine years in DuPage County, State's Attorney's Office spokesman Paul Darrah said.

Because of his age, the teen's name was not released. An attorney for the teen could not be immediately identified.