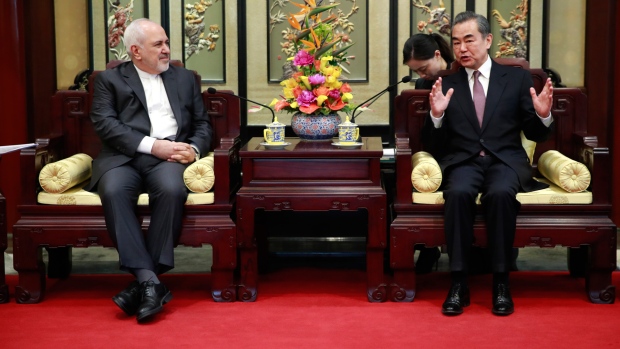 Iranian Foreign Minister Mohammad Javad Zarif, left, and his Chinese counterpart Wang Yi, right, during their meeting at the Diaoyutai State Guesthouse in Beijing, China, Tuesday, Feb. 19, 2019. The foreign ministers of China and Iran met in Beijing on Tuesday amid efforts to preserve the 2015 nuclear deal with Tehran.(How Hwee Young/Pool Photo via AP)

BEIJING - The Iranian foreign minister's passionate defence of his country's interests at the Munich Security Conference has made him “a famous person” in China, his Chinese counterpart told him Tuesday, as the sides met amid efforts to preserve the 2015 nuclear deal with Tehran.

Foreign Minister Mohammad Javad Zarif is leading an Iranian delegation to Beijing that includes parliamentary speaker Ali Larijani and the ministers of finance and petroleum, as well as the CEO of the country's central bank.

Germany, Britain, France, China, Russia and the European Union have been trying to preserve the 2015 deal meant to keep Iran from obtaining nuclear weapons in exchange for sanctions relief after the unilateral withdrawal of the United States last year.

“Yesterday evening I saw on TV how you defended the rights of Iran loud and clear at the Munich Security Conference,” Chinese Foreign Minister Wang Yi told Zarif. “I think an audience of hundreds of millions of Chinese also watched what you said and you are a famous person now.”

A perception held by many Chinese that the U.S. seeks to contain their nation's global rise generates sympathy among the public for Iran and other countries, such as Venezuela, identified by Washington as hostile powers.

Zarif told the Munich conference on Sunday that a barter-type system known as INSTEX set up last month by France, Germany and Britain to allow businesses to skirt direct financial transactions with Iran, and thereby evade possible U.S. sanctions, fell short of commitments to save the nuclear deal.

He addressed the conference a day after U.S. Vice-President Mike Pence prodded Germany, France and Britain to follow Washington in withdrawing from the deal and to “stop undermining U.S. sanctions.”

Wang made no direct comments on China's position on the deal in opening remarks before reporters on Tuesday, but said he was “really delighted” to meet with Zarif “given the major changes in the Middle East and the international landscape.”

“I would like to take this opportunity to have this in-depth strategic communication with my old friend to deepen the strategic trust between our two countries and to ensure fresh progress of the bilateral comprehensive and strategic partnership,” Wang said.

Zarif responded by saying Iran's relationship with China “is very valuable to us.”

“We consider the comprehensive strategic partnership between Iran and China as one of our most important relations,” he said.

Prior to parliamentary speaker Larijani's departure from Tehran, China's official Xinhua News Agency quoted him as saying that Iran and China have “close and amicable” relations in diverse areas, and that both sides have enjoyed the support of each other in the international arena.

Asked about China's position on the Iran deal and Washington's re-imposition of sanctions, foreign ministry spokesman Geng Shuang said China had made clear its disapproval.

“We have always opposed unilateral sanctions and long-arm jurisdiction,” Geng said, referring to U.S. efforts to compel other countries to adhere to measures it imposes outside the United Nations.

China has long sought to balance its relations in the Middle East between rivals Iran and Saudi Arabia - one of its chief suppliers of crude oil - whose de facto leader, Crown Prince Mohammed bin Salman, is due to visit Beijing on Thursday and Friday for meetings with President Xi Jinping and other Chinese officials.

Iran is also an important source of crude imports to China, which has also invested in manufacturing and other industries in Iran.

At the same time, China has sought to remain a friend to Israel - which Iran regards with hostility - partly to avail itself of the country's cutting-edge technologies.

Yin Gang, a retired researcher formerly with the Chinese Academy of Social Sciences, said China was feeling a greater sense of urgency and may press Iran to take a “practical attitude” in light of U.S. concerns over its missile program, support for Syria's embattled leader and other U.S. concerns.

The Saudi crown prince's visit imposes pressure from the opposite direction, however, Yin said.

“For many years, Saudi Arabia has expressed its hopes that China not do anything to block sanctioning Iran,” Yin said.