Desperation, pressure for aid increase in Haiti after earthquake 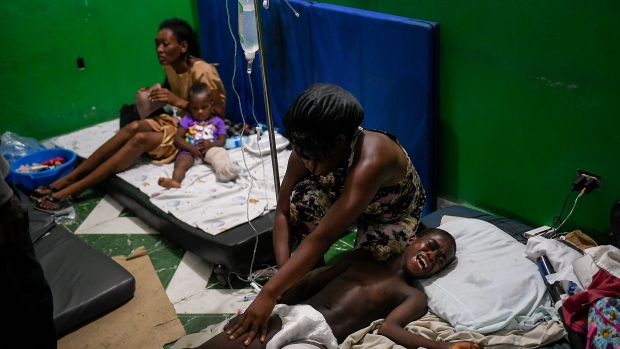 A boy grimaces in pain, at the Immaculee Conception hospital in Les Cayes, Haiti, Tuesday, Aug. 17, 2021, three days after an earthquake struck the southwestern part of the nation. (AP Photo/Matias Delacroix)

LES CAYES, Haiti (AP) - Pressure for a coordinated response to Haiti's deadly weekend earthquake mounted Wednesday as more bodies were pulled from the rubble and the injured continued to arrive from remote areas in search of medical care. Aid was slowly trickling in to help the thousands who were left homeless.

International aid workers on the ground said hospitals in the areas worst hit by Saturday's quake are mostly incapacitated and that there is a desperate need for medical equipment. But the government told at least one foreign organization that has been operating in the country for nearly three decades that it did not need assistance from hundreds of its medical volunteers.

Meanwhile, Prime Minister Ariel Henry said Wednesday that his administration will work to not “repeat history on the mismanagement and coordination of aid,” a reference to the chaos that followed the country's devastating 2010 earthquake, when the government was accused of not getting all of the money raised by donors to the people who needed it.

In a message on his Twitter account, Henry said that he “personally” will ensure that the aid gets to the victims this time around.

The Core Group, a coalition of key international diplomats from the United States and other nations that monitors Haiti, said in a statement Wednesday that its members are “resolutely committed to working alongside national and local authorities to ensure that impacted people and areas receive adequate assistance as soon as possible.”

Haiti's Civil Protection Agency raised the number of deaths from the quake to 2,189 from an earlier count of 1,941 and said more than 12,000 people were injured. The magnitude 7.2 earthquake destroyed more than 7,000 homes and damaged more than 12,000, leaving about 30,000 families homeless, officials said. Schools, offices and churches also were demolished or badly damaged.

While some officials have suggested that the search phase has to end and heavy machinery should be called in to clear rubble, Henry appeared unwilling to move to that stage.

“Some of our citizens are still under the debris. We have teams of foreigners and Haitians working on it,” he said.

He also appealed for unity: “We have to put our heads together to rebuild Haiti.”

“The country is physically and mentally destroyed,” Henry said.

The U.S. Geological Survey said a preliminary analysis of satellite imagery after the earthquake revealed hundreds of landslides.

Tensions were growing Wednesday over the slow pace of aid efforts. At the airport in the southwest city of Les Cayes, one of the hardest-hit areas, throngs of people gathered outside the fence at the terminal after an aid flight arrived and crews began loading boxes into waiting trucks. One of the members of a Haitian national police squad on hand to guard the shipments fired two warning shots to disperse a group of young men.

Angry crowds also massed at collapsed buildings in the city, demanding tarps to create temporary shelters that were needed more than ever after Tropical Storm Grace brought heavy rain on Monday and Tuesday.

One of the first food deliveries by local authorities - a couple dozen boxes of rice and pre-measured, bagged meal kits - reached a tent encampment set up in one of the poorest areas of Les Cayes, where most of the warren's one-story, cinderblock, tin-roofed homes were damaged or destroyed by Saturday's quake.

But the shipment was clearly insufficient for the hundreds who have lived under tents and tarps for five days.

“It's not enough, but we'll do everything we can to make sure everybody gets at least something,” said Vladimir Martino, a resident of the camp who took charge of the precious cargo for distribution.

Gerda Francoise, 24, was one of dozens who lined up in the wilting heat in hopes of receiving food. “I don't know what I'm going to get, but I need something to take back to my tent,” said Francoise. “I have a child.”

The quake wiped out many of the sources of food and income that the poor depend on for survival in Haiti, which is already struggling with the coronavirus, gang violence and the July 7 assassination of President Jovenel Moise.

“We don't have anything. Even the (farm) animals are gone. They were killed by the rockslides,” said Elize Civil, 30, a farmer in the village of Fleurant, near the quake's epicenter.

Civil's village and many of those in the Nippes province depend on livestock such as goats, cows and chickens for much of their income, said Christy Delafield, who works with the U.S.-based relief organization Mercy Corps. The group is considering cash distributions to allow residents to continue buying local products from small local businesses that are vital to their communities.

Large-scale aid has not yet reached many areas, and one dilemma for donors is that pouring huge amounts of staple foods purchased abroad could, in the long run, hurt local producers.

“We don't want to flood the area with a lot of products coming in from off the island,” Delafield said. She said aid efforts must also take a longer view for areas like Nippes, which has been hit in recent years by ever-stronger cyclical droughts and soil erosion. Support for adapting farming practices to the new climate reality - with less reliable rainfall and more tropical storms - is vital, she said.

Etzer Emile, a Haitian economist and professor at Quisqueya University, a private institution in the capital of Port-au-Prince, said the disaster will increase Haitians' dependence on remittances from abroad and assistance from international nongovernmental groups.

“Foreign aid unfortunately never helps in the long term,” he said. “The southwest needs instead activities that can boost economic capacity for jobs and better social conditions.”

One of the country's most immediate needs now is medical equipment.

“The hospitals are all broken and collapsed, the operating rooms aren't functional, and then if you bring tents, it's hurricane season, they can blow right away,” said Dr. Barth Green, president and co-founder of Project Medishare, an organization that has worked in Haiti since 1994 to improve health services.

Green was hopeful the U.S. military would establish a field hospital in the affected area.

U.S. Coast Guard helicopter crews concentrated on the most urgent task, ferrying the injured to less-stressed medical facilities. A U.S. Navy amphibious warship, the USS Arlington, was expected to head for Haiti on Wednesday with a surgical team and landing craft.

Green noted that his organization has “hundreds of medical volunteers, but the Haitian government tells us they don't need them.”

He said Project Medishare was deploying nonetheless, along with other organizations. He said he sensed caution on the part of the government after bad experiences with outside aid following previous disasters.

At the public hospital in L'Asile, deep in a remote stretch of countryside in the southwest, the obstetrics, pediatric and operating wing collapsed, though everyone made it out. Despite the damage, the hospital was able to treat about 170 severely injured quake victims in improvised tents set up on the grounds of the facility.

People were arriving from isolated villages with broken arms and legs.

Mercy Corps said about half of L'Asile's homes were destroyed and 90% were affected in some way. Most public buildings where people would normally shelter also were destroyed. The nearby countryside was devastated: In one 10-mile (16-kilometer) stretch, not a single house, church, store or school was left standing.