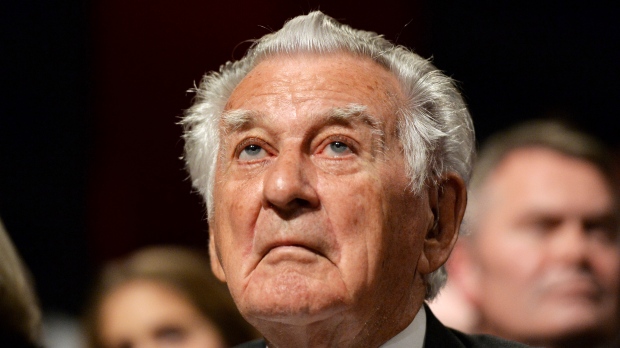 CANBERRA, Australia -- Bob Hawke, Australia's longest-serving Labor Party prime minister, whose charisma and powers of persuasion earned him near-folk hero status among many Australians, died on Thursday, his wife said. He was 89.

The former union leader dedicated much of his political career to trade union issues, and he was widely regarded as a man of his people. He had a down-to-earth attitude, a passion for sports and legendary status among beer lovers -- for once drinking himself into the record books.

He won four terms as prime minister, serving from 1983 to 1991 before being ousted by his own centre-left party when the economy soured. Only two other prime ministers served Australia longer, and both were members of the conservative Liberal Party.

He had been actively supporting Labor's campaign for elections on Saturday after six years in opposition. He also said he doubted he would survive to see the Labor victory predicted in opinion polling.

Opposition leader Bill Shorten said Hawke had transformed Australian society and protected the environment, a reference to his government preventing the damming of a wild river in Tasmania state to generate electricity in a major environmental conflict in 1983.

Prime Minister Scott Morrison said Hawke had "defined the politics of his generation and beyond."

"Bob Hawke was a great Australian who led and served our country with passion, courage, and an intellectual horsepower that made our country stronger," Morrison said.

Robert James Lee Hawke was born in the agricultural community of Bordertown, South Australia, to a Congregationalist minister father. By the time he entered politics, Hawke had abandoned his religious upbringing and declared himself agnostic.

His lifelong involvement with the labour movement began in 1958, when he joined the Australian Council of Trade Unions, first as a researcher and later as a union advocate. After scoring several high-profile wins before the Arbitration Commission, Hawke rose through the ranks of the ACTU and was elected its president in 1969.

Over the next decade, Hawke developed strong ties with both union representatives and their traditional rivals -- employers and government agencies -- winning him a reputation as an easy operator. Negotiations over labour disputes were as likely to take place at the bar over copious beers as before the courts.

His reputation as a tippler was cemented during his years as a Rhodes scholar at Oxford University in England, where he earned a Guinness world record by downing 2 1/2 pints of beer in 11 seconds.

"This feat was to endear me to some of my fellow Australians more than anything else I ever achieved," Hawke wrote of the 1955 stunt in his autobiography.

In 1980, Hawke publicly swore off alcohol and was elected to Parliament, immediately taking up a high-profile role as the opposition's spokesman for industrial relations, employment and youth.

Still, he never shook his booze-loving reputation, and in his later years, did little to discourage it. A January 2012 video of a then-82-year-old Hawke chugging a beer at a cricket match as cheering and laughing fans shouted, "One for the country, Robert!" exceeds a million hits on YouTube.

Not everyone loved him, of course. Some viewed him as arrogant, sexist, even obnoxious. Hawke was notorious for his short temper and womanizing ways; he admitted to repeatedly cheating on his first wife, Hazel Masterson, during their 39-year marriage and married his biographer and mistress, Blanche d'Alpuget, shortly after their divorce.

"Today we lost Bob Hawke, a great Australian -- many would say the greatest Australian of the post-war era," d'Alpuget said in a statement.

Prime Minister Hawke and his treasurer, then successor, Paul Keating "modernized the Australian economy, paving the way for an unprecedented period of recession-free economic growth and job creation," she said.

Australians embraced Hawke as a larrikin, an Aussie term for someone considered endearingly mischievous.

On the strength of his personality and growing popularity with voters, Hawke was elected prime minister on March 5, 1983, after less than three years in Parliament and only one month as leader of the Labor Party.

He came to power preaching consensus and, through his intimate knowledge of both the trade union and business communities, was able to forge a wage accord that helped to minimize industrial disputes.

On the back of his success, Hawke called an early election and was again swept to power in 1984.

Hawke broke a 1984 campaign promise and called early elections again in 1987, after the Senate twice rejected a government proposal to introduce a national identity card, which Labor said was necessary to crack down on tax evaders and welfare cheats. He was narrowly elected to a fourth term in 1990.

But as Australia plunged into recession, Hawke's enormous popularity began to wane and his rule as prime minister finally ended on Dec. 20, 1991, when he was ousted by his own party. He retired from Parliament the following year.

Despite his background in the union movement, Hawke's approach to the economy was largely conservative. In 1983, he oversaw the floating of Australia's currency and later set in motion the sale of several state-run industries -- including airlines, banks and telecommunications companies -- and curbed government subsidies to underperforming sectors.

Like many Australians, Hawke was an avid sports fan, always ready to roll up his sleeves and place a bet.

In 1983, when Australia broke the United States' 132-year winning streak in the America's Cup yacht race, Hawke proclaimed the day a national holiday, famously saying, "Any boss who sacks anyone for not turning up today is a bum."

D'Alpuge said she will hold a private funeral with his children Sue, Stephen, Rosslyn and stepson, Louis, and his grandchildren. A memorial service will be held in Sydney in coming weeks.